Proposed policy to return to the board for action in December 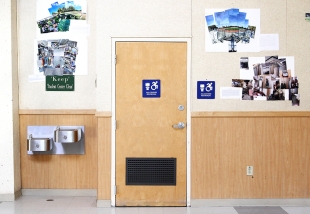 New gender-neutral bathroom signs have been installed in single-stall restrooms at Palo Alto High School. A new policy under consideration by the school board affirms transgender and gender non-conforming students' right to access a restroom for the gender with which they identify. Photo by Veronica Weber.

Taking action to create safer, more inclusive school environments guided by respect is so important. At Family & Children Services of Silicon Valley, we appreciate the efforts being made in this direction.

I suppose this is the reason why Paly graduation gowns will all be green starting this year rather than previously boys wear green and girls wear white.

My personal impression was that seeing the green and white amongst the graduates was a much better sight than perhaps what the dullish green color alone will look on all. Perhaps looking for my own student will be much more difficult as I have no color to help.

However, this is progress and we must do what we must do.

This subject was brought up to me by students a month or two ago. They are not happy because at least one major school event can no longer happen, Homecoming King and Queen.
They said to me, that they should still be able to have Homecoming and whoever wants to participate can. Everyone can still vote for who they want.

The majority of our high school students are much more educated in this community than we give them credit for. Palo Alto is very close knit and most of our kids grew up with each other and stayed friends regardless of life changes, status changes, etc.
There are always those (rotten apples) who are plain old mean and don't want to understand or care - "welcome to the real world, it's not just peaches and cream". There is good and bad amongst us ALL!

Report Objectionable Content
Email Town Square Moderator
10 people like this
Posted by Razz
a resident of Gunn High School
on Nov 13, 2015 at 3:37 pm

The comments are perplexing to me. Sure, people might be a tad inconvenienced by the changes, but if it saves a teenager from feeling ostracized or worse, it's worth it. Gunn still had its homecoming court. In fact, the school made two innovations. No "gender slots" for nominating homecoming court members, and they didn't allow student council members, the ones running the event, to be eligible for the court. I think it turned out great. Maybe threw some positive attention at a few people who wouldn't have had it. And life goes on. We have more work to do to make this a kinder and gentler place to live for all of us. Treat others as you want them to treat you.

Report Objectionable Content
Email Town Square Moderator
6 people like this
Posted by Emperor is Wearing No Clothes
a resident of Another Palo Alto neighborhood
on Aug 22, 2016 at 9:32 am

I am sympathetic to individuals with gender identity issues and am supportive of stronger anti-bullying regulations as well as granting access to whatever bathrooms they choose.

However, I oppose forcing the sharing of locker rooms with people of the opposite biological sex in elementary, middle and high school. Further, I think PAUSD should be ashamed of itself for rapidly advancing policy without adequate planning, scientific study, analysis to the impact of these changes on people with aligned sexual identity or input from the general populace.

Even a cursory objective review of the above and the PAUSD gender identity regulation shows a ridiculous level of poorly defined terms and hopeless logical conundrums.

Exactly which scientific or government authority gets to define these identities and how many can be legitimately recognized? What peer reviewed studies have been completed to substantiate the validity of this mental structure, the benefit to the very small number of gender mis-aligned and the impact to everybody else?

Sadly, I don't think there are any. This issue was forced down by Federal fiat and exploited as an end of term mandate. Thankfully, the court system is already stopping this in other states.

It is time that we also take a step back and do a better job in PAUSD as well. Dictating change only increases resentment and stifles tolerance. We owe it to the vulnerable as well as the majority to build a lasting consensus on this issue.