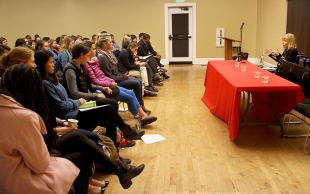 Congresswoman Jackie Speier addresses students at Stanford University about campus sexual assault and her proposed legislation on the subject, called the Hold Accountable and Lend Transparency (HALT) on Campus Sexual Assault Act, during a Student Congressional Summit on Sexual Assault at Stanford on Nov. 9, 2015. Photo by Veronica Weber.