Luck is sidelined 2-6 weeks due to a lacerated kidney 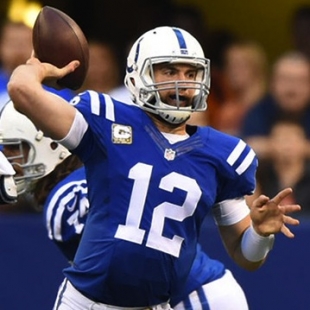 Former Stanford quarterback Andrew Luck will be lost to the Indianapolis Colts from 2-6 weeks after suffering a lacerated kidney and partially torn abdominal muscle on Sunday. Photo courtesy of Colts.com

The 2015 National Football League season has been a physical grind for former Stanford quarterback Andrew Luck, who has taken more than his share of hits.

The extent of that pounding became even more evident Tuesday when the Indianapolis Colts announced that Luck would miss two to six weeks with a lacerated kidney and a partially torn abdominal muscle.

Pagano said the injuries should not require surgery and that Luck is expected to make a full recovery, possibly before the end of the regular season.

Without Luck, the Colts (4-5) will turn to 40-year-old Matt Hasselbeck, who went 2-0 when Luck was held out because of an injured right shoulder.

"It is one heck of a blow," Pagano said. "You don't want to lose anybody. Our guys will respond, like they always do. We've been through a ton already this season and in the past and we'll get through it."

It has been a challenging season for the Colts, a team that started with Super Bowl aspirations and played like anything but a contender until knocking off previously unbeaten Denver 27-24 on Sunday in Indianapolis.

Luck's injury was suffered early in the fourth quarter against the Broncos, the team announced. Luck amazingly stayed in the game and helped the team finish off a victory.

The timing is especially cruel as Luck is coming off his best performance of the season, by far, against the top-ranked Broncos defense as he threw for 252 yards and a pair of touchdowns.