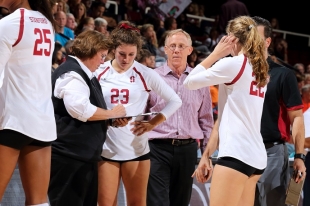 RPI rather than AVCA rankings are used in setting Tournament seeds. While both will be seeded, Stanford is #12 and Washington #7 in RPI. If Stanford wins, they will move up, possibly into the Top 8. The Top Four seeds look to be Minnesota, USC, Texas, and Penn State.

One of UW's starting MBs is Melanie Wade from Palo Alto HS.