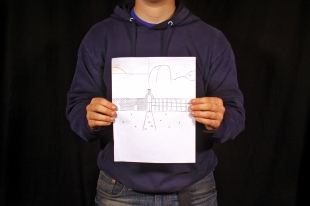 "Scott," a transgender Palo Alto High School student whose name has been changed to protect his privacy, holds a self-portrait he drew. The left side represents his father and the right, his mother, as he stands at a crossroads The Weekly asked several transgender students in this story to create self-portraits in whatever medium they liked. Photo by Veronica Weber.