Fixes on the way for popular Baylands attraction 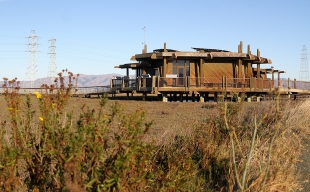 The Interpretive Center at the Palo Alto Baylands. Photo by Veronica Weber.

11 people like this
Posted by Resident
a resident of Another Palo Alto neighborhood
on Nov 6, 2015 at 8:06 am

I am delighted to hear that progress is being made here.

Please can we have some trail signs and maps for visitors too. I am constantly asked by non local visitors for directions to bathrooms or the or the other side of the park, how long a trail is or where's the nearest coffee/snack shop.

This is great news! The city's Interpretive Center and the Environmental Volunteers' EcoCenter are two excellent environmental education resources in the Baylands. Glad to hear the IC will receive much needed repair.

>> At the same time, the city is looking ahead to repairing the damaged boardwalk that rolls out from the building and overlooks the salt marsh.

I remember walking way out there on the pilings for PG&E to the left and right of the main boardwalk. It was great, before everything was so "safe" and monitored by police, or had to be monitored by police. You could go out there at any time and walk way out under the electrical towers. All you had to do was to raise the handrails like a bar counter to the bartender station.

Palo Alto used to be a lot more fun. About a year and a half ago I was pulled over by the police for just driving out to the Baylands a bit too early to take a walk ... it was still dark thanks to the time change. I am sure Palo Alto is much safer for that.

Report Objectionable Content
Email Town Square Moderator
12 people like this
Posted by Gethin
a resident of Midtown
on Nov 6, 2015 at 11:42 am


This is excellent news! I have to admit the boardwalk is dearer to my heart so I hope that gets fixed and opened as soon as possible.

Report Objectionable Content
Email Town Square Moderator
5 people like this
Posted by Mike
a resident of Mountain View
on Nov 6, 2015 at 12:30 pm

Been there literally dozens of times and it has never been open. Hundreds walk by. Not open. Better to knock the place down and erect open air exhibits. That way everyone could learn, at all hours, every day. Spend the saved money on repairing and maintaining the rest of the area including the truly dreadful state of the overflowing sewage in the area leading to the launch site. Instead, PA wants an ugly expensive intrusive failed monument to someone who would probably have recognized its failure, and that it attracts dozens of swallows which shouldn't be there.

Report Objectionable Content
Email Town Square Moderator
7 people like this
Posted by LizzyBell
a resident of Midtown
on Nov 6, 2015 at 12:33 pm

So excited about the renovation. Viewing slots are great for bird watching. Birds tend to hit glass when flying in. Are there volunteer opportunities to help in the restoration and or when it opens again?

Report Objectionable Content
Email Town Square Moderator
12 people like this
Posted by anonymous
a resident of Duveneck/St. Francis
on Nov 6, 2015 at 3:00 pm

It's all great, just wish the work could be accelerated. Take a look at the long drawn-out timeline...

Report Objectionable Content
Email Town Square Moderator
6 people like this
Posted by RU Bored or RU Boring
a resident of Adobe-Meadow
on Nov 7, 2015 at 7:33 am

@Plane Speaker, just yesterday I did a PG&E walk you said you "used to do" when Palo Alto was "More fun".
It was good fun, no issues. Now I'm no zen master, but the fun may not have left Palo Alto, the fun may have left you. No matter what time from the late 60's until now we always had to watch for police at certain times, but it was part of gig. As like your early morning experience we were never cited so it was just some talking too now and then. The only time I was stopped on the power-pole walk was back in the late 80's.

Report Objectionable Content
Email Town Square Moderator
2 people like this
Posted by Plane Speaker
a resident of Crescent Park
on Nov 7, 2015 at 2:07 pm

>> @Plane Speaker, just yesterday I did a PG&E walk you said you "used to do" when Palo Alto was "More fun".

Where did you access the boardwalk, down by the boat/sailboard launch?

My point though is that you could not have taken the walk I used to. The last time I checked people could not get out to the boardwalk from the Nature Center. The boardwalk out the observation platform is a real hazard per the facts in this article. I was not talking about taking any real personal risk, and the access to the PG&E boardwalk was not gated off with hurricane fencing as it is today.

Myself and friends used to go out the Baylands after dark all the time and the police never came around except once in a while to patrol to make sure there were no crimes occurring or danger, not to tell people to leave or give them trespassing tickets. Then in the late 80's there was some crime and vandalism that ruined it for everyone.

Palo Alto was definitely more fun back then, when adults could make adult decisions for themselves, and the facts I cited prove my case.

Questioning my "funlovingness" is not fun for me. Next time you go to the Baylands leave that chip in your shoulder out there to compost.

Report Objectionable Content
Email Town Square Moderator
8 people like this
Posted by GladBut
a resident of Menlo Park
on Nov 7, 2015 at 6:19 pm

I'm glad to see that it is finally getting attention. But seriously. Does the process really have to be:

- Raise money bonds or gifts
- Build
- Enjoy
- Ignore
- Keep ignoring
- Allow to fall apart
- Continue to allow to fall apart
- Debate whether how we let it fall apart
- Argue if we should really fix things or just tear them down.
- Decide to repair
- Spend years on studies and budget cycles
- Spend an inordinate amount of money on what WOULD HAVE BEEN simple maintenance
- Repeat

Report Objectionable Content
Email Town Square Moderator
10 people like this
Posted by William Warrior
a resident of Midtown
on Nov 7, 2015 at 10:53 pm

So glad to read of the proposed restoration. It is worth it to restore the interpretive center and the boardwalk regardless of the time and expense and the cowtowing to the "Palo Alto Process." I walked the boardwalk countless times in my youth in the 1970s. The site was a welcome escape to another world of early California like the Ohlone knew California, and very much my guiding light to my future career choices of serving our indigenous animal communities by applying for and winning a place in the City of Palo Alto Animal Services Division of the Palo Alto Police Department. The Interpretive Center was the first meeting place for instruction of the first volunteers in the newly founded Wildlife Rescue Inc. Palo Alto in 1974. I remember Gary Bogue of Alexander Lindsay Junior Museum giving us heartfelt, sardonic and practical lectures in the care and rehabilitation of orphaned and injured indigenous species, and the room filled to capacity with willing volunteer applicants. The Baylands Interpretive Center, its boardwalks and surroundings are a learning lab for all ages and an inspiration for future generations committed to serving the life of our San Francisco Bay. Long may Palo Alto serve her part in San Francisco Bay's preservation for all time.

Anne Le Ziblatt, formerly of Tamarine and Bong Su, is back with a Vietnamese noodle bar in Redwood City
By Elena Kadvany | 7 comments | 3,756 views