Channing House veterans memorialize those who sacrifice for their nation 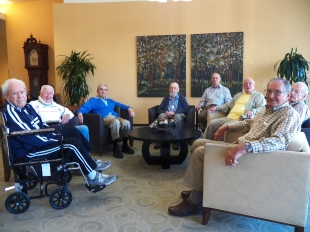 Yes, they are heroes. It's disturbing that the government doesn't take care of them. I recall Obama promising to help the veterans. I phoned the VA and offered to volunteer but they brushed me off and said all they had was being a driver.

Like this comment
Posted by A Vet
a resident of Another Palo Alto neighborhood
on Nov 6, 2015 at 12:48 pm

The following data about those who served in wars during the 20th Century, and today--was cobbled together from various sourcesâ€”

The United States entered World War I in
April 1917. Over 4.7 million men and women
served in the regular U.S. forces,
national guard units, and draft units.
There were 53,402 killed in action,
63,114 deaths from disease and other causes,
and about 205,000 wounded.
New York, Pennsylvania, Illinois, and Ohio
furnished the most soldiers.

This sort of data can be found on-line, but probably is not taught in public schools.

Americans owe so much to its veterans. Sadly, itâ€™s hard to get much sense that many Americans know, or care, much about their service, or contributions to American history and security.