Secco paves the way for Stanford field hockey into semifinals 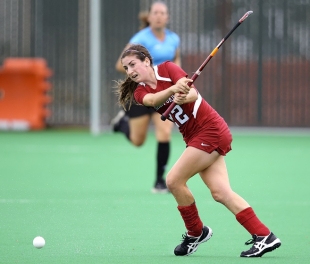 Maddie Secco had two goals and an assist for Stanford. Photo by Hector Garcia-Molina/stanfordphoto.com

The 13th-ranked Stanford field hockey team found itself behind by a goal in the second half of its America East Conference tournament quarterfinal match Thursday against Vermont.

That's when senior Maddie Secco, a member of the Canadian national team and recently named America East Offensive Player of the Year, took over, scoring twice and the Cardinal rallied to beat the Catamounts, 5-2, in Albany, N.Y. to advance into Saturday's semifinals at 11:30 a.m. (PT) against an opponent to be determined.

Secco also added an assist for Stanford (13-5), which is seeking its sixth trip to the NCAA tournament in the past seven years and its 14th overall. The Cardinal won its first-ever NCAA match last season.

Vermont (4-16) took a 2-1 lead 12 minutes into the second half before Stanford began its comeback with Secco scoring four minutes later. Katie Keyser drove to the right end line to set up Secco.

Clemence Couteau gave the Cardinal the lead for good in the 60th minute, on a rebounded shot. Stanford got off 15 shots in the second half, as opposed to five in the first half.

Fran Tew converted a penalty stroke and Secco scored on a back-handed shot to complete the victory.

Caroline Beaudoin scored in the first half for the Cardinal, with assists from Sarah Helgeson and Secco on a penalty corner.

These local restaurants are donating meals to Bay Area residents in need. Here's how to help.
By Elena Kadvany | 6 comments | 11,090 views