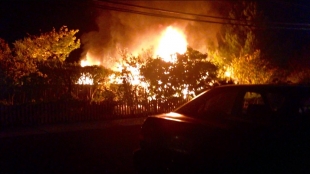 A one-story home on the 500 block of Maybell Avenue is engulfed in flames. The house was gutted but no was injured in the incident, according to firefighters. Photo courtesy of Rafael Alvarez.

Glad to know that no one was injured. Would the family that got affected , or ARC, or neighbors, share how others in the community can help the displaced family?


Report Objectionable Content
Email Town Square Moderator
2 people like this
Posted by Resident
a resident of Another Palo Alto neighborhood
on Nov 5, 2015 at 11:08 am

The article states that the Red Cross are helping the family. To those who want to help the family the best way at this stage I think would be to contact Red Cross and see what help they need most and what the community can do to help.

Report Objectionable Content
Email Town Square Moderator
6 people like this
Posted by Annika
a resident of Barron Park
on Nov 5, 2015 at 2:02 pm

Annika is a registered user.


How tragic. Our BP home was destroyed by fire in 2004 and we lost everything. Losing one's home to fire is unimaginably traumatic. In hindsight, what we could have used more help with was finding a place to stay while our home was rebuilt. Even back then, it was incredibly tough to find an affordable place, even with a one-year lease period. Assuming the family will stay and rebuild, they'll need a long term rental; if they relocate, they'll need a shorter term place. We finally found, through a real estate agent, a place to rent in BP, but were charged way over asking price by the owner for a "share" situation. I encourage anyone with connections to good rentals in the area to step forward and offer assistance. I wish them well and will definitely reach out personally to them, too.

At a recent meeting I attended, a Red Cross representative mentioned that they are particularly concerned about finding housing for people displaced by fire during the Super Bowl. For more information or to offer help contact Franci Collins,administrator@immigrantinfo.org.

There are plenty of affordable rentals in the south bay and places further east, not everyone in the world has to live in Palo Alto.

Report Objectionable Content
Email Town Square Moderator
9 people like this
Posted by Greenacres
a resident of Green Acres
on Nov 5, 2015 at 5:54 pm

Someone appears to be vacating one of the rental homes that are part of the group PAHC sold to Golden Gate homes, probably Candace Gonzales. The moving truck was there today. Is the home still available for the short term? It would be the perfect solution, because it's almost across the street.

I also lost my home in a major fire, and one of the hardest problems is time. Everything is different. Think about the consumer probkems that crop up with new purchases, too, and imagine it's 100times worse because it's all at once. And you have no stable place that is familiar. And everything works differently. One of our elderly neighbors who also lost her home had loved to bake before the fire. Five years later, she still hadn't used the new oven because she was so overwhelmed. A high school volunteer showing her how to use the oven and baking with her a few times would have helped. I know that sounds like nothing, but when you lose everything, things like that make moving forward possible.

Another problem is insurers. Hopefully, they are insured, but for the elderly, it's very common for insurers to take advantage. Volunteer lawyers and accountants in the community can make all the difference.

Recovering from such a thing is a long haul.

If you are family or close neighbor of the family, I think there are Greenacres and Barron Park neighbirs who would like to help. I'm so heartened to hear the expressions of support above - please everyone stick with it and offer your support even if the Red Cross is helping now, there are simple ways neighbors can make a difference for a long time to come. Thank goodness they are ok at least.

Report Objectionable Content
Email Town Square Moderator
1 person likes this
Posted by jim
a resident of Barron Park
on Nov 6, 2015 at 7:22 am

Thank you firefighters! I was watching and the whole block could of been burned down if you didn't arrive so quickly.