The meaning of life 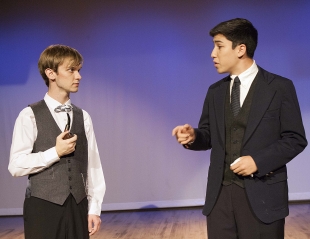 In the center of a Gunn High School choir room, twelfth grader Max Mahle is running lines for the opening of Thornton Wilder's "Our Town" with the play's director Jim Shelby.

"It's a martini, not a milkshake," Shelby says of Mahle's delivery. "A martini is dry -- not a gloppy, sweet, sentimental thing."

Shelby notices even the most delicate tone inflections and hand gestures.

"You have folded arms. Don't get locked into it. One can cradle the other. Don't stick your hands in your pockets," he advises Mahle.

Shelby, a who last directed "Our Town" at Gunn in 1996, said one of the reasons he chose to revisit the Pulitzer Prize-winning play is that many don't seem to be familiar with the production today. As a result, he said, audiences could benefit from the play's simple theme of taking time to stop and smell the roses.

The play is set in the fictional small town of Grover's Corners, new Hampshire, in 1901. The Gunn High School production spotlights life's often automated routine through a pantomimed newspaper delivery, the lighting of a stove, the stringing of beans and the trimming of a lawn. Characters are seen in flashes as their lives pass: preparing for school in the morning, finishing homework, falling in love, marrying and finally facing the reality of death.

Shelby said that the play underscores how easy it is to take life for granted amid the frenzy of our daily routines and tasks.

"I hope the audience will emerge changed," Shelby said of the show, adding that the goal is for people to "leave the theater startled into the urgency of living your life every moment... of paying attention to the sunrise, listing to the rain, the crickets, looking at the fog."

Mahle, who plays the character of Stage Manager, says he was first attracted to the role after seeing a performance of the show last year. The demanding role requires the memorization of lengthy blocks of dialogue, which Mahle likened to a shopping list.

"The dialogue in 'Our Town' is all minutia and all these little intricate details about the town," he said.

Mahle said he hopes the audience leaves with a feeling of uncertainty about the way they lead their own lives.

"I feel like that's what Thornton Wilder would have wanted," he said.

Mahle said "Our Town" is not far from the classic Charles Dickens novel, "A Christmas Carol," explaining that the main character Emily's eyes are opened when she is taken back to a moment from her past and observes her husband, George, from a distance.

"It's like Ebenezer Scrooge (going) back... George is living in a world with a shield over his eyes and he doesn't quite see it," Mahle said.

In the final act of the play, Emily raises a central point of the play when she utters Shelby's favorite line: "Do any human beings ever realize life while they live it -- every, every minute?"

To which the Stage Manager replies: "No. The saints and poets, maybe they do some."

"Our Town" was rebellious for its time, Shelby said. Wilder begins the play with the simple instructions: "No Curtain. No Scenery." The stage remains largely bare, with the exception of some chairs and a table, in an effort to help the audience appreciate the general message of the story. At the same time, the stark staging helps the audience remember that they are, in truth, watching a play. The Stage Manager character further aids in breaking down the fourth wall by carefully watching audience members arrive to take their seats and engaging them in conversation at the start of the performance.

As part of the rehearsal process, Shelby had the actors take time to close their eyes and meditate, pondering the meaning of their lives and identifying one thing they would miss about life. Answers ranged from warm bread to video games to spending time with a sibling. This process helped them them to focus on what is truly important, he said.

According to Shelby, many students today have a fear of the future.

"Students have 4.5 GPAs and take five or seven APs. I have some of those kids (in the play), and this is the way they let off steam."

Jessica McKeown, a senior at Gunn and the play's student director, feels "Our Town" reinforces the notion that every life carries meaning -- an idea that is often overlooked, she noted.

"Everyone has an archetype of who they are," she said.

The play, she added, is largely successful for its ability to highlight the fragility and rapid nature of life without dipping into sentimentality or cliche. She recalled her favorite scene in which high school-aged Emily and George are completing homework at night when they pause to admire the moon.

McKeown appreciates the scene for the way it spotlights developing characters in a simple context.

"Every life," McKeown said, "no matter how long or how short or how seemingly insignificant, is a beautiful life and a beautiful story."

What: "Our Town," presented by the Gunn Theatre Department

These local restaurants are donating meals to Bay Area residents in need. Here's how to help.
By Elena Kadvany | 6 comments | 11,121 views

Will the Coronavirus Save Lives?
By Sherry Listgarten | 29 comments | 3,900 views

The first few seconds after awakening; before I remember the virus
By Chandrama Anderson | 0 comments | 980 views