Stanford's Cartwright out with fractured forearm 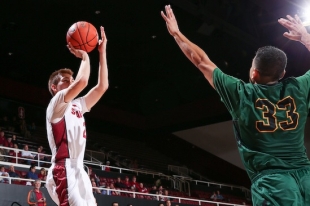 Robert Cartwright is out indefinitely with a compound fracture in his forearm. Photo by Bob Drebin/stanfordphoto.com

Sophomore guard Robert Cartwright sustained a compound fracture in his forearm during a routine drill on Monday and will be lost indefinitely, Stanford men's basketball coach Johnny Dawkins said Tuesday.

Cartwright, expected to be the Cardinal's starting point guard, is the latest causality for Stanford, which will likely start the season without Marcus Allen, Malcolm Allen and Grant Verhoeven as well.

"He lost his balance going through traffic and landed funny," said Dawkins, who spent time with Cartwright at the hospital Monday night and Tuesday morning. "It was a routine play. It shows you how fragile our sport is."

Cartwright averaged 1.9 points and 0.9 rebounds a year ago. He was replacing Chasson Randle, who set a school record for all-time 3-pointers last year in helping Stanford win the NIT title.

Christian Sanders is the likely replacement and could share the job with freshman Cameron Walker.

Malcolm Allen appears to be the closest to returning to the lineup. He has been participating in practice in a limited role.

Marcus Allen and Verhoeven could return in December. Dawkins would not speculate on Cartwright's timeline.

Stanford, picked to finish ninth in the Pac-12, opens the season at home on Friday, Nov. 13 against Wisconsin-Green Bay as part of the NIT Season Tip-Off.

In related news, Pasadena Maranatha senior Trevor Stanback, 6-10, committed to Stanford on Monday according to a report by The Bootleg.

Coronavirus: Plan ahead now for a big outbreak
By Diana Diamond | 19 comments | 4,099 views