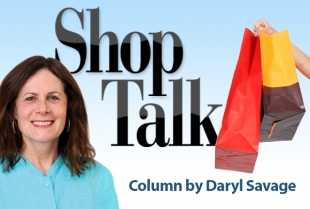 "The French Chef," will be playing in the restrooms."

Wow, this place must be good! Nothing like listening to old Julia, while urinating, to get the taste buds going.

I hope their noise level control works.
Palo Alto really needs a restaurant that serves excellent food in which you can hear your dinner companion without having to shout. It also needs a good restaurant where the service is excellent, instead of mediocre at best.
I'm still looking for a Palo Alto restaurant where the taste of the food comes first and presentation, while important, is not the headline. I'm also still looking for one where the sound level is not deafening, I can heat my dining companion, and servers are attentive without trying to pad the bill.
Good luck.

YES!!!
ANY RESTAURANT WITH THE GOOD SENSE TO LOWER THE SOUND LEVEL SO THAT WE CAN TALK TO EACH OTHER WILL GET MY BUSINESS!!! WHEN WILL THEY EVER LEARN?

Report Objectionable Content
Email Town Square Moderator
10 people like this
Posted by Hurray
a resident of Old Palo Alto
on Nov 2, 2015 at 11:57 am

Report Objectionable Content
Email Town Square Moderator
9 people like this
Posted by Jerry99
a resident of Barron Park
on Nov 2, 2015 at 12:51 pm

If the restaurant is inspired by Julia Child I hope they bring out the entrees on hot plates. I had to send the food bad in the last three restaurants because it came out lukewarm. Two were >150$/couple without wine restaurants.
Remember Julia Child insisted on having hot food delivered to the customers. Do that and it will help develop repeat customers.

Report Objectionable Content
Email Town Square Moderator
5 people like this
Posted by ME
a resident of Downtown North
on Nov 2, 2015 at 12:55 pm

Did I miss it? What kind of food?

My hearing is good. My parents have hearing aids, which amplify all sound including background noise. Many local restaurants are impossible for us to patronize; if they must turn off aids, no conversation is possible.

Report Objectionable Content
Email Town Square Moderator
3 people like this
Posted by Nayeli
a resident of Midtown
on Nov 3, 2015 at 9:51 am

Report Objectionable Content
Email Town Square Moderator
6 people like this
Posted by MAGGIE
a resident of Old Palo Alto
on Nov 3, 2015 at 1:23 pm

@ALLYOUCANEAT haters have to hate. I think it sounds cute & clever. I'm sure you have a memorable resume of projects that are perfect.

Report Objectionable Content
Email Town Square Moderator
5 people like this
Posted by Just in Case
a resident of Another Palo Alto neighborhood
on Nov 3, 2015 at 2:57 pm

Just in case you never saw the movie, "Julia and Julie", here's a warning: Julia Child cooked with A LOT of butter!

She and her husband did live into their 90s though.