Cardinal women in thick of the Pac-12 volleyball race 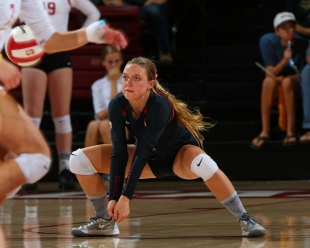 The seventh-ranked Stanford women's volleyball team will hit the road knowing there's still plenty at stake in the Pac-12 Conference. The Cardinal just need to forget the road has not been kind, which may be easy following Friday's action.

Stanford rallied from behind to beat No. 19 Arizona, 25-22, 19-25, 25-18, 25-14, at Maples Pavilion and dominated the final set and a half. It's an encouraging sign in what is turning out to be a wide open race for the conference title and a Pick 'em for the NCAA tournament.

At about the same time, in Seattle, host Washington was giving top-ranked and undefeated USC all kinds of fits and eventually knocked off the Trojans in straight sets. The Trojans were the last unbeaten team in the nation.

Whether that helped turn the tide for Stanford is unknown and not as significant as the Cardinal turning things around on its own merit in the third set after being down by as many as five, at 12-7.

From that moment forward, Stanford outscored the Wildcats by a 43-20 margin with a barrage of kills, digs, blocks, passes and assists from a variety of players.

The Cardinal is off until Thursday night's 8 p.m. match at Oregon, but Stanford will have an interest in Sunday's action, particularly that UCLA-Huskies match at 11 a.m. The Cardinal moves into a third-place tie with the loser with scheduled matches still to come against both powerhouses.

Hodson (15), Howard (13) and Lutz (12) had the majority of kills, Jordan Burgess and Ivana Vanjak each contributed seven to keep the Arizona defense honest. Vanjak's first ace came just when Stanford needed a spark in the third set.

Stanford, winners of 19 straight against the Wildcats, hit .235 as a team, while holding Arizona to .107.

An offensive assault of 25 shots by Stanford Field led the way to a 2-1 Cardinal win over Pacific in the final America East regular- season game Friday night at Varsity Turf.

With the win, the Cardinal claims a co-championship with Pacific in the West Division headed into next week's tournament, where Stanford will be the No. 1 seed for the West Division. The Cardinal finish the regular season with a 12-5 record and 4-2 in conference play while Pacific finishes at 10-7 overall and 4-2 in the America East.

"I was happy with the way our team played today. I thought we really went after it," said Stanford coach Tara Danielson. "It was a full team effort, and we needed that heading into the America East Tournament next week. My hat is off to the Pacific goalkeeper, she had an amazing performance, but we're happy to get the win and looking forward to the tournament next week."

The Cardinal struck first in the 11th minute of action as a penalty corner by Sarah Helgeson was sent to Maddie Secco, who placed a perfect assist to help Jessica Chisholm crush her shot into the bottom left corner to make it 1-0 Stanford. The Tigers didn't remain quiet though, as they capitalized on a penalty stroke that Savannah Burns put past Dulcie Davies in the top left corner for her eight goal of the year.

While Stanford topped Pacific 13-2 in shots in the half, UOP's Laura Pujade made the difference for the Tigers with seven saves to keep them in the hunt as they headed into the half tied 1-1.

Coming out of the break, the Cardinal took charge in the second as they peppered the Lions with 12 more shots. The heavy offensive attack paid off for Stanford in the 41st minute though as Chisholm and Fran Tew both posted shots saved by UOP's Pujade before Clemence Couteau collected another rebound that she buried into the corner for the game-winning goal.

These local restaurants are donating meals to Bay Area residents in need. Here's how to help.
By Elena Kadvany | 6 comments | 11,122 views

Will the Coronavirus Save Lives?
By Sherry Listgarten | 29 comments | 3,900 views

The first few seconds after awakening; before I remember the virus
By Chandrama Anderson | 0 comments | 981 views