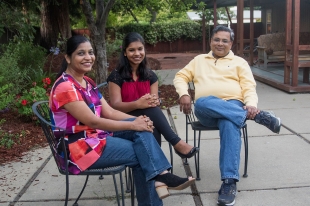 Shraddha Agarwal and husband Samir Mittal and their daughter Anika Mittal have lived in their Eichler in the Walnut Grove neighborhood since 2013 after moving from Minnesota. Photo by Veronica Weber, June 2018.