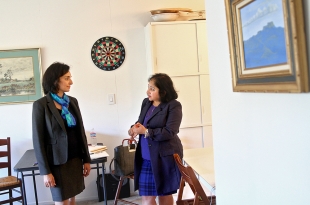 Margaret Petros speaks with Heba Tawadross, an attorney working with MAM providing pro bono legal help towards immigration and work permits for Assyrian families who have fled from Iraq, at a condo that is occasionally used to provide shelter for victims the organization works with on Oct. 7. Petros, Tawadross and MAM founder Roger Smith (not pictured) were meeting to discuss the current status of Iraqi families they are helping. Photo by Veronica Weber.