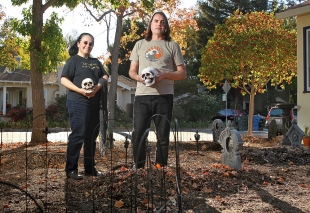 Andrea Edelman and Jeremy Watt stand in the front yard of their College Terrace home decorated to look like a cemetery, as they prepare to host trick-or-treaters on Halloween. Photo by Veronica Weber.

The biggest safety issue with Halloween is reckless drivers. Please leave your cars at home if possible. If you must drive, please obey the speed limits and stop at all stop signs. Look for and yield to pedestrians at crosswalks and intersections. Treat all intersections as legal crosswalks, even if there are no lines painted in the street. Park in legal parking spaces only. If you have a SUV or minivan, please do not park near intersections and crosswalks, since that blocks pedestrian's vision and also makes pedestrians harder to see by other car drivers.

Parent - you are so right! We often drive on Halloween and are extra careful. A couple years ago a driver went nuts when she couldn't turn onto the street I was turning from. I'll never forget it because she was incredibly angry, honking her horn and yelling. Why? Because trick or treaters were crossing the street and I yielded to them, which meant she had to wait for me. We had just left our friend's house in Crescent Park when we encountered her and the area was filled with families on foot. It was bizarre.

6 people like this
Posted by Resident
a resident of Another Palo Alto neighborhood
on Oct 25, 2015 at 11:07 pm

The most neighborly thing to do is to stay in your own neighborhood. It is good for the kids to recognize the people who live in the houses they trick or treat at and it is also good that the people giving out the treats recognize the kids. This is the neighborly way to do it. Driving somewhere else just because the decorations are better or the treats are better defeat the object of being neighborly. In my opinion, it should be a time to get to know your own neighbors better and perhaps start new friendships as a result.

2 people like this
Posted by Safety First
a resident of Another Palo Alto neighborhood
on Oct 26, 2015 at 10:48 am

Make sure at least every adult is carrying a good Flashlight - preferably one with red blinking lights so that you can be seen. My kids love carrying flashlights too.

Report Objectionable Content
Email Town Square Moderator
8 people like this
Posted by neighbor
a resident of Another Palo Alto neighborhood
on Oct 26, 2015 at 3:01 pm

I don't know. It seems so calculating, so over-engineered for mommies to plan out scientifically where you will drive your kids to optimize their "Halloween haul." How about wandering around your own neighborhood experiencing life with serendipity.
Plus, it's obvious if porch lights are off that a particular home is not participating in Halloween.

To "neighbor": I don't think this is meant to "over-engineer" Halloween activities but to invite families to come to those houses where they've spent a lot of effort to decorate their home and will be available for trick-or-treating.

I see fewer homes in Ventura with any Halloween decorations and they keep the lights off so fewer kids are coming to trick-or-treat here. Last time we decorated and bought candy and only one group came by all night!

Report Objectionable Content
Email Town Square Moderator
4 people like this
Posted by parent
a resident of Professorville
on Oct 27, 2015 at 10:36 am

According to the CHP, car vs pedestrian fatality rates typically double on Halloween compared to other days. If you must drive that evening, please be extra careful.

Please Apply So We Can Reject You!
By John Raftrey and Lori McCormick | 6 comments | 2,735 views