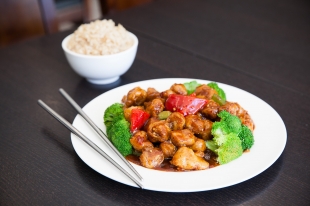 It may be vegan, but the general's chicken at Veggie Garden is a rich Hunan dish featuring battered, deep-fried nuggets of soy chicken smothered in sweet-and-spicy gravy. Photo by Michelle Le.

It should be mentioned that the wonderful Garden Fresh (on El Camino & Shoreline, next to the Baskin & Robbins) has been serving the vegetarian community for decades. The copycat Veggie Garden was started by a relative of the Garden Fresh owners without their blessing. That they set up shop so close to the original points to the bad blood between them.

I have been a very happy customer and friend of Garden Fresh for close to 15 years. I would on principle never set foot in the knockoff Veggie Garden.

5 people like this
Posted by Au Contraire
a resident of Another Palo Alto neighborhood
on Oct 22, 2015 at 7:57 pm

I have been a vegetarian since I was 17 years old. I prefer Veggie Garden to Garden Fresh for two reasons: the food is less oily, and the service is friendlier.

I heartily applaud the existence and opening of vegetarian and vegan
restaurant alternatives. They are sorely needed, but I have to wonder
why virtually all of them are so bad, and so expensive on top of it?

I have been trying to work my diet closer to WFPB, what they call
Whole Food, Plant Based diet for years. it is difficult, inconvenient
and very expensive to do with restaurant food ... almost impossible to
eat healthy and get enough nutrients and calories.

The first thing is that vegan fare is lighter so you have to eat more
of it to sustain your nutrition. A carnivore can eat a steak and potatoes
and feel full and satisfied for hours, even though they may be creating
unhealthy conditions in their body setting themselves up for heart
disease, stoke, type-2 diabetes and other problems.

So the natural alternative some might want who desire to avoid
these diseases or attempt to reverse them is to eat a plant-based
diet, however you must eat lots and lots of veggies to fill you up,
get enough nutrients and be satisfied.

What that translates to in most vegan places are small "gourmet"
portions that are hardly real meals and if you added up the
nutrition values of them, as on the backs of cans and packages
you would be surprised and aghast at how little actual nutrition
you are getting .... especially for your dollar.

No, you are not getting animal fat, or animal protein which has
been linked by Dr. Colin Campbell and others to different cancers
at least in mice. What you get are the same fillers your get in
other restaurants and usally a small amount of veggies, and you
pay more not less for it than your would in a regular non-vegan
restaurant.

You can still avoid the bad stuff and feel good, like for driving a
Prius or picking up after your dog, but the vegan restaurant in
my opinion does not make economic or nutritional sense at this
point in time.

Another thing is that since you must eat more food as a vegan
it takes longer to eat. Instead of downing a quick burger you
have to sit for an hour to eat a salad. That makes the seats in
a vegan restaurant that would serve you a real full meal put
them at an economic disadvantage. I know I have a big bowl
or oatmeal with flax seeds, blueberries, walnuts, somes times
other things for my breakfast that can take me the better part
of an hour to finish, and sometimes more. Can you imagine
trying to make money with 1 customer taking up a seat for
the entire breakfast shift? It ain't happening, so you get
small portions. It's not that some of them are not very good.

I had a great purple sweet potato dish at a local restaurant,
but there were only 5 small pieces of sweet potato ... at the
store that probably translates to maybe $0.50 cents, with some
greens and rice ... that is not very much input, and the dish
cost over $12. And it is not a real complete nutritious meal.

If you ask at Veggie Garden, they will cook your meal custom with low oil and much spice. I have wanted to love Garden Fresh but found their food way too salty. I do know many people who love both. More options for vegan is great. I actually like Veggie Garden for the ways it is different than GF.