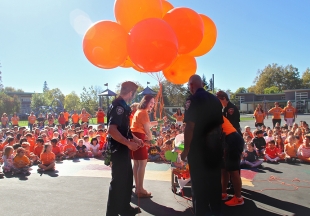 Palo Alto Unified Schools District board Vice President Heidi Emberling, center, laughs as she and Palo Alto firefighters — from left captain Marc Muzzi, engineers Mark Williams and Sheila Donavan and Duveneck Elementary School instructional aide Sarrie Paguirigan — launch giant helium-filled balloons into the air as students watch during a Unity Day assembly on Oct. 21, 2015. Messages written by students regarding unity, friendship and being an upstander were tied to the balloons, which remained tethered to a cart during the school day. Photo by Veronica Weber.

Juana Briones was always such a kind school, and took a lot of kids who left Barron Park when they were having bullying problems (no longer, BPE is a lovely place now from everything I hear. I have also heard the same of Duveneck, that things have gotten better.) Briones I think had a lot of teacher retirement for a few years there, though. Not sure if that affected the culture.

On the other hand, the experience of middle school for us made it what I would call "Irony Day" more than unity day. The day should include anti-bullying efforts among teachers and staff, not just students.

4 people like this
Posted by And the agony
a resident of Another Palo Alto neighborhood
on Oct 21, 2015 at 7:28 pm

Keep in mind both Briones and Duveneck had serious issues with special ed and OCR. It's comical to see both schools and Glenn McGee doing a dog and pony show because those would be the two schools most fitting for it. I had better be careful, though, because also keep in mind that McGee and the board are spending our money to lawyer up, not for our kids, but just for them.

Report Objectionable Content
Email Town Square Moderator
9 people like this
Posted by Parent of 3
a resident of Jordan Middle School
on Oct 22, 2015 at 12:13 am

Duveneck doesn't/didn't have much bullying and we had been there since 2007. Teachers are good with working on stopping it. We ran into a few while we were there and the teachers took our complaints seriously. There is no school with no bullying.

Unity Day is just another feel-good activity but does not change behavior.

Report Objectionable Content
Email Town Square Moderator
4 people like this
Posted by Parent of 3
a resident of Duveneck/St. Francis
on Oct 24, 2015 at 8:44 am

Duveneck does not have a school wide practice of "Responsive Classroom." Mr.Grierson loves to pretend things are happening that are not.

Report Objectionable Content
Email Town Square Moderator
3 people like this
Posted by Parent of 3
a resident of Jordan Middle School
on Oct 24, 2015 at 1:05 pm

Agree with other Parent of 3 that Duveneck's principal, Grierson, doesn't deal with bullying as well as he should. He's not a strong personality, and it takes a stronger personality to deal with bullying. We dealt with him with a bullying issue and the other parents flattened him like a steamroller. Fortunately, the parents cared more about their son's reputation so they halted the bullying on their own. The teachers are the key there.

'Are they ready for fully innovative Indian food?' Ettan arrives in Palo Alto with chaat, caviar and a secret menu
By Elena Kadvany | 0 comments | 3,591 views

Flying: How to lower your impact
By Sherry Listgarten | 11 comments | 2,559 views