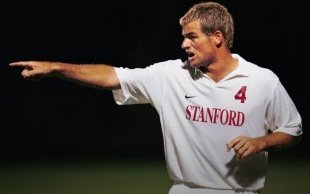 Ryan Nelsen of Stanford (1999-2000) was named to the Pac-12 All-Century team in soccer. Photo courtesy of Stanford Athletics.

Defender Ryan Nelsen (1999-2000) was voted to the starting XI, while forward Ted Rafalovich (1978-81) and defender Chad Marshall (2002-03) were named as reserves. Twenty-three players representing five different decades were chosen from a field of 64 players nominated by Pac-12 institutions.

Nelsen was a 2000 NSCAA Scholar-Athlete of the Year and Pac-10 Player of the Year. He scored 28 goals in 375 professional appearances following his stint at Stanford.

He started 11 times for the USMNT, helping his country to an 8-2-1 record in those matches. Marshall has appeared in 312 MLS games for the Columbus Crew and Seattle Sounders, scoring 17 times. At Stanford, he was the Soccer America Freshman of the Year in 2002.

These local restaurants are donating meals to Bay Area residents in need. Here's how to help.
By Elena Kadvany | 6 comments | 11,091 views