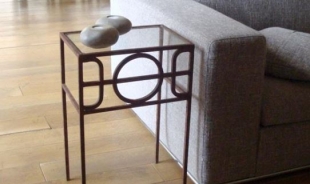 Benedicte de Blavous Moubarak designed this side table for Beyt. It is made out of a 1920s art-deco gate salvaged in Beirut, Lebanon. Photo courtesy of Beyt by 2b design.

I wish someone would open a business that sells the rubble of some of the de-constructed old mansions being torn down.

I do find it amazing, though, that a business could pay their exorbitant T&C lease payments selling war rubble.

Let's get this straight.

These people directly or indirectly pick over debris of a bloody civil war; take interesting architectural elements; and sell the reworked debris as decorations for Americans' homes. All with a provenance/explanation of the significance of the debris to delight the buyer and admiring guests to the home.

And this paper celebrates it as creating beauty.


Does this benefit former owners of the salvaged material? Are the bits of "architectural history" scavenged or bought? I'm not sure how this business helps Middle Easterners see Americans as anything other than opportunists, taking advantage of victims of a terrible war & trivializing the losses.

Report Objectionable Content
Email Town Square Moderator
23 people like this
Posted by Amazed
a resident of Another Palo Alto neighborhood
on Oct 23, 2015 at 10:11 am

This is disgusting and above all, shameful.

I honestly don't see who could bear to buy the products, knowing what they're made of. That isn't beauty!

This makes American look so callow.


How do these business owners think they will make a living, or even a profit, from this?

My guess is they won't be in T&C long.

Report Objectionable Content
Email Town Square Moderator
15 people like this
Posted by Beyt
a resident of Midtown
on Oct 27, 2015 at 11:23 am

As the co-founders of beyt by 2b design we invite and welcome all those who have unanswered questions about our social enterprise to visit us at T&C or to go to our website www.2bdesign.biz.

We will be very happy to share with you our model featured in the Harvard Business Review as a case study in social entrepreneurship, taught in business schools and covered in international media including BBC World News TV; explain why we joined the community of Certified B Corporations, a community of only 1400 companies worldwide independently audited for their social and environmental impact. We will be thrilled to show you how this model is replicable in any country, including here in the US and not just in conflict zones. Most of all and closer to Palo Alto we will be very excited to take you through our plan of creating employment and rebuilding dignity for disenfranchised, marginalized persons in the community based on our tried and tested model abroad and in our Cambridge, Massachusetts workshop.

We look forward to meeting/speaking with you very soon!

Report Objectionable Content
Email Town Square Moderator
17 people like this
Posted by Hope
a resident of Another Palo Alto neighborhood
on Oct 27, 2015 at 12:57 pm

Having been involved in non-profit organizations for a long time, it is refreshing to see that businesses are now engaging in heritage preservation and social commitment. I havenâ€™t visited the store yet, but I checked out their website and I feel that these people have found a way to make a positive difference on many levels.

Report Objectionable Content
Email Town Square Moderator
9 people like this
Posted by Unique
a resident of Old Palo Alto
on Oct 27, 2015 at 3:08 pm

It's amazing what this store and the people behind it offer . Not only they transform ruins from the most historic places in the world to beautiful art work that you feel proud to look at let alone have it in your own home . I have been to the store and behind every piece there is a special story to tell and a unique person who put love and care into making it whole . Beyt keep up the good work and good deeds .

Report Objectionable Content
Email Town Square Moderator
12 people like this
Posted by Indigenous Person
a resident of Another Palo Alto neighborhood
on Oct 27, 2015 at 4:44 pm

The Navajo and Pueblo people have names for people who remove historic ruins. Both translate to " thieves of time". It is believed that such people will come to ruin in return for taking ruins from their home.

Of course, the Navajo and Pueblo people refer to Anasazi ruins. But historic ruins are no different regardless of where they come from: it is theft to take them.

Report Objectionable Content
Email Town Square Moderator
14 people like this
Posted by Beyt
a resident of Midtown
on Oct 27, 2015 at 6:45 pm

As founders of Beyt we invite all those who are still unclear to visit our shop or our website.

Our efforts of purchasing and buying from salvage yards sections of balconies, remnants of gates and railings destined to be melted down have saved these pieces from total disappearance. They all originated from houses and buildings that have been demolished and for the most part replaced by high rises. Our creations are first and foremost available in the country where salvaged.

The same model can be applied in cities like Detroit, New Orleans and numerous other places in the US and around the world.

As for our pillows and lampshades, they are made out of remnants of Chanel fabric, 19th century linens from bridal dowries hand-dyed in different colors, vintage suzani from Central Asia and old saris from India. They are all hand-made in our Cambridge, Mass. workshop where the focus is to employ and train homeless or marginalized women.

Other items we carry have a social and environmental purpose. Examples are fair trade jewelry handmade in Ethiopia by HIV positive women out of melted down coins and bullet casings, hemp and resin baskets from Africa, glassware and ceramic items from one of the few remaining workshops in Damascus, Syria.


Report Objectionable Content
Email Town Square Moderator
6 people like this
Posted by Uh-Oh
a resident of Stanford
on Oct 28, 2015 at 1:12 pm

It is the WAR ruins that are offensive!