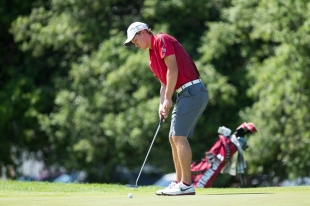 Juniors Casey Danielson and Quirine Eijkenboom carded even-par 71s at Stanford Golf Course on Sunday to lift the ninth-ranked Cardinal to the first-day lead in the Stanford Intercollegiate hosted by Condoleezza Rice.

Stanford, the defending NCAA champions, finished with a four-player total of 3-over-par 287. Washington and UCLA share second in the elite 17-team, 54-hole tournament, that features five of the nation's top 10 programs.

Quirine Eijkenboom
Marissa Chow of Pepperdine fired the low round of the day, fashioning six birdies and only one bogey to shoot a 5-under-par 66. That was one stroke better than 2014 medalist Bronte Law of UCLA, who posted 67.

"Thrilled with the start," said Anne Walker, the Margot and Mitch Milias Director of Women's Golf. "I think we left a couple of shots out there, just having it be our home course. But I like where we are."

Teeing off first for Stanford, Eijkenboom birdied the par-5 first and par-3 third holes to get the Cardinal rolling. She finished with four birdies and four bogeys, shooting 1-under on the breezy back nine.

"My approach shots were working today," said Eijkenboom. "I hit them pretty close and I hit a lot of greens. Whenever I missed a green, I had a good up and down."

Eijkenboom flagged her third shot to the first hole within five feet of the pin, and nestled a 6-iron to three feet at the third.

"It was nice to get off to a good start," she said.

Danielson, who teed off second, made three birdies and three bogeys. She toured the front nine in 1-under-par, capped by a big-breaking 15-foot left-to-right birdie putt to the back right pin at the par-4 ninth.

"Pretty consistent and solid today," Danielson said. "It could have been a few strokes better if I made a few more putts, but can't complain at even par."

Danielson said conditions toughened as the day wore on.

"The wind definitely picked up," she said. "These hole locations are pretty tough. We play here a lot, but we don't see these tournament hole locations that much. It just took a bit of adjusting and playing a little smarter than we're used to. But I think as a team we didn't pretty well with that."

Sophomore Shannon Aubert shot 72 and is tied for 10th. Seniors Lauren Kim (73) and Mariah Stackhouse (74) are tied for 15th and 25th, respectively.

Walker was pleased to see the bottom part of her lineup make such strong contributions.

"Casey and Quirine have been working really hard," she said. "They're terrific players when you look at their resumes for their whole careers. Their games haven't been where they've wanted them to be, but they've been putting in the time and the reps. To see it pay off . . . I couldn't be happier for them."

"I think it's going to continue to be tough," Walker said. "We put some really challenging hole locations out there and that's to our benefit but can also be to our detriment if we forget. Pretty happy all around."

Stanford's Maverick McNealy shot a final round of 5-under 67 at the U.S. Collegiate Championship at the Golf Club of Georgia on Sunday to jump 16 spots and finish in a four-way tie for first.

The Cardinal shot a team round of 290 and finished sixth with a three-round total of 869, 14 strokes behind co-champions Wake Forest and Auburn.

McNealy took sole possession of third on Stanford's all-time chart with his eighth career win. He's three shy of matching the school record shared by Patrick Rodgers and Tiger Woods. It was McNealy's third top-10 finish in as many events on the season.

McNealy opened with a 69 and bounced back from a second-round 74. He had one bogey over his final 20 holes and put together a four-birdie stretch in as many holes in his opening round.

Stanford returns to the course at the Gifford Collegiate Championships in November.

These local restaurants are donating meals to Bay Area residents in need. Here's how to help.
By Elena Kadvany | 6 comments | 11,077 views

Coronavirus: Plan ahead now for a big outbreak
By Diana Diamond | 19 comments | 4,091 views