The look of luxury 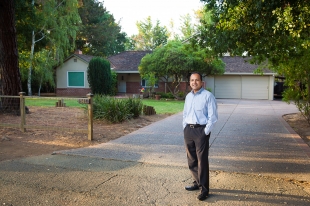 Nash Verghese stands at his Los Altos home, which he bought because of its larger lot, on Sept. 25, 2015. Photo by Michelle Le.

Freelance writer Karla Kane can be emailed at karlajkane@gmail.com.

I am one of those who would not afford my own house today, interesting sense of comfort, when it comes down to it, we are all renters on this earth, and ultimately I will leave my 2000 square foot home for a 12 square foot plot, just like all my neighbors will and all the foreign investors. But in the meantime I am sad to witness the decimation of this community and its drowning in this wealth and luxury nonsense.