Woodside family remodels to make property work for everyone 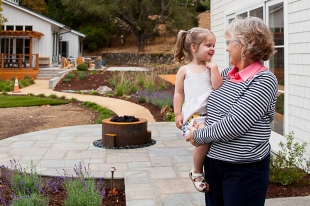 Betsy Hobson spends time with her 2 1/2-year-old granddaughter, Emma, at her Woodside home on Oct. 1, 2015. The extra time with the grandchildren is a perk of her new cottage on the property that she shares with her daughter and son-in-law. Photo by Michelle Le.

Kate Daly is a freelance writer with Embarcadero Media.

This is a wonderful story that shows how families can make space for each other in their lives.

This kind of option is going to be increasingly relevant as Boomers continue to retire - there's just not a lot of options for smaller units in this area for seniors who want to downsize, and there's not a lot of reasonable options for family homes for younger couples that want to raise children. Sharing a lot like this makes a lot of sense.

We would LOVE to build a granny unit on our lot and then give the big house to our son and his family, while we move into the granny unit. The. We would always be available for child care.

But the city will not give us a permit to build a 1bdrm 1ba cottage because they say our lot is too small. Nor will they allow us to add another bedroom and bathroom to the house for the same reason ( even though the bedroom and bath would be upstairs--it is a two-story house already).

So we are stuck here because of the capital gains tax added on in 1996, as well as the increase in property taxes if we move--even if we downsize

This situation is creating a LOT of miserable people over the age of 55.

2 people like this
Posted by Resident
a resident of Another Palo Alto neighborhood
on Oct 21, 2015 at 5:43 pm

I'm just wondering what will happen when the grandparents need to move to a care facility or similar. Will these units then be available for non family renters? What does this sort of thing mean for the future when the home is eventually sold?

Report Objectionable Content
Email Town Square Moderator
8 people like this
Posted by anneke
a resident of Professorville
on Oct 22, 2015 at 10:06 am

It takes a village for children to grow into good human beings, and that includes loving grandparents.

There is something very special and magic for a child to have wonderful grandparents who live close by and whom they can visit with frequently.

Kudos to the family in this story. You are a great example for many families.


Report Objectionable Content
Email Town Square Moderator
8 people like this
Posted by MidtownMom
a resident of Midtown
on Oct 22, 2015 at 10:31 am

The multi-generational living is very common in Asia due to multiple reasons - family obligations, cost of living etc. It has its own advantages and can work out very well once the boundaries are established and the generations respect the boundaries.

The grand children help grandparents remain "young" at heart, the grandparents have responsibilities that they thrive on ..

Report Objectionable Content
Email Town Square Moderator
3 people like this
Posted by Todd
a resident of Another Palo Alto neighborhood
on Oct 22, 2015 at 1:43 pm

Why should this be encouraged? Will more people living in existing homes not exacerbate traffic and parking issues, as well as drain resources such as water?

Report Objectionable Content
Email Town Square Moderator
4 people like this
Posted by Godspower Amraibure
a resident of Woodside
on Feb 7, 2016 at 8:10 pm