An estate sale makes the Judds' move to Hawaii seamless 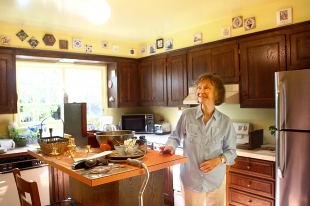 Ingrid Judd admires her tile collection, which hangs above the kitchen cabinets in her home on Ramona Street in Palo Alto on Sept. 11, 2015. Photo by Veronica Weber.

Have a lovely retirement! Thanks for sharing your experience.

What about those of us who want to seriously downsize and spend part of the year somewhere else? The trouble is that it's impossible to "cash out" and keep some kind of home downsized home here. (I do not want an apartment in a center.) The problem is the taxes. Has anyone tried this?

Ok, maybe someone wants to retire on an Island far away from friends and family. Cool for them but what about the people who want to downsize and stay here in their hometown?

Not everyone wants to move away, especially if, like me, they have children nearby working in the tech field.
There probably will not be a big change with older homeowners downsizing in this town until something is done about capital gains and there is something nice and affordable to move to. It's great to cash out and move far away but I think many long time home owners want to retire here.

Report Objectionable Content
Email Town Square Moderator
13 people like this
Posted by Plane Speaker
a resident of Crescent Park
on Oct 21, 2015 at 3:12 am

eileen said ...
>> There probably will not be a big change with older homeowners downsizing in
>> this town until something is done about capital gains and there is something
>> nice and affordable to move to.

This is so true, and while it may be the driver of the scarcity of homes on the
market and the rise in prices it also knocks a lot of people either out of selling
their houses or of staying in the area.

Between federal and state taxes on the sale of a house, the money you are left
with will not even let the typical Palo Altan downsize into anything that exists in
our market or even much that is close by. Correct me if I am wrong here, but
I think that is accurate for most people who are not liquid enough to just buy
another house and rent out the old one.

The law used to be that if you sold your house within some period of time if
you re-invested the proceeds of that sale into another house you would be
able to defer or negate the taxes due on that sale.

Currently as I understand it you get a $250K deduction and taxes on everything
else, which is going to be almost everything for someone who has owned a
Palo Alto home for 40 years.

Are we missing out on a lot of development that could be done as these houses
would turn over, instead of huge high density development?

I am all for the theory of making capital gains and earned income the same and
merely dependent on the sum of both of them against the tax rate tables, but
house profit is something different, certainly something the economy and government
ought to want to support more than the silly gamble of dumping everyone's
retirement into the stock market pushing up the market so speculators can skim
off the rise in prices until everything drops back down again.

The current law keeps people in houses until a crisis and basically foments
crises by not giving people good options.

Report Objectionable Content
Email Town Square Moderator
5 people like this
Posted by PAmoderate
a resident of Old Palo Alto
on Oct 21, 2015 at 9:17 am

PAmoderate is a registered user.


Yep. Prop 13 has pretty much tied the hands of seniors looking to downsize. Amazing how it was touted as a way for seniors to keep their homes when it was passed. Too bad the unintended consequence is that it burdens them with their own property for the rest of their lives and ties them down.

Always think of the unintended consequences when you think "there outta be a law..." Remember that Los Arboles residents....

Report Objectionable Content
Email Town Square Moderator
13 people like this
Posted by Tied Down
a resident of Another Palo Alto neighborhood
on Oct 21, 2015 at 12:49 pm

The implementation of capital gains tax as well as loss of exemptions for people over 55 has tied us down to Palo Alto. We would like to buy a larger home in a less expensive area, one we could share with our son and his children, but we would not have enough money to buy down a new mortgage into something affordable.

At our age ( late 50s), we want to buy a house outright or have a very small mortgage we could pay off in ten years.
But the property tax increase combined with loss of profits and no exemptions for being over 55 makes it impossible.
Complicate that with the fact that so few Ametican citizens can afford our house, or qualify for a mortgage that size-- even with 50% down!

We do NOT want to sell to a foreign investor.

Report Objectionable Content
Email Town Square Moderator
3 people like this
Posted by Craig Laughton
a resident of College Terrace
on Oct 21, 2015 at 1:07 pm

>Yep. Prop 13 has pretty much tied the hands of seniors looking to downsize. Amazing how it was touted as a way for seniors to keep their homes when it was passed.

Prop 13 was, and is, a great law. People were able to keep their homes in Palo Alto, without getting taxed into forced sales/exile. I am one of them. Using myself as an example, my property has increased in value, and I could sell anytime I want to (btw, I don't)...but I want to have the option. In general, I agree that lower capital gains taxes would open up the market for those who are thinking of selling. With the liberals in charge, this won't happen...thus we have a cork stuck in the neck of the bottle.