When this generation buys, and why 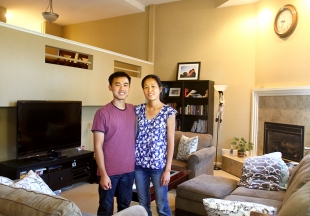 Alex and Harmony Shyr found their Mountain View townhouse after two months of searching. They made the offer on their place in June 2013. Photo by Veronica Weber.

Great article! My wife and I have deal with the same concerns about purchasing home. Now, we have our first child coming and would love to see her playing in a backyard but the cost of living in the bay area has made it almost impossible to save enough money for a decent deposit.

I read a lot of interesting articles about millennials. Here is Web Link the article I liked the most. The author of the article says that a recent New York Times article summed up the plight of the millennials quite well. They are the most highly education generation (27% have a Bachelorâ€™s or higher), yet their median annual earnings are about $2000 less than their counterparts in 1980.