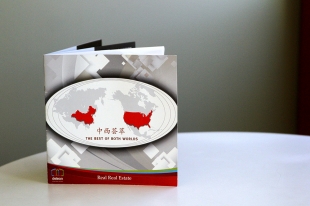 DeLeon Realty brochures for international clients include both English and Mandarin explanations about real estate in Silicon Valley. Photo by Veronica Weber.

Muna Sadek is an editorial intern at the Palo Alto Weekly.

Flying: How much is enough? It's personal.
By Sherry Listgarten | 5 comments | 1,563 views