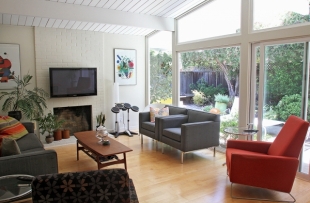 Lynn Drake's Eichler living room showcases the home's typical design elements, including floor-to-ceiling glass windows and doors which face out to a backyard that also wraps around the side. Photo by Veronica Weber.

We support this single-story overlay.

And we support the councilperson's attempt to honor the process that has been followed by this neighborhood of homeowners.

We are not anti-2-story, btw.
There are a examples of tasteful and considerate 2-story renovations, some of them borrowing Eichler themes and fitting right in.

Blame the architects or blame the new homeowners, I don't know, but the vast majority of 2-story rebuilds in South Palo Alto are out-of-character Orange County monstrosities, dwarfing and crowding their 1-story Eichler neighbors.

Congrats to Greer Park North and Los Arboles for putting in the time and effort.

The notion of an overlay seems at surface valuable but the notion falls short. There is far less value
in a historic home and a property that can not be built out.

Really? This seems like some desperate speech & debate argument of a losing contestant. Everyone knows that even a shack in Palo Alto will sell in a New York minute.

My son is studying computer science at an out-of-state university and the CS students said they should all take a road trip to Palo Alto! When he told them he grew up here, they were all speechless.

Agree with homeowner's statement: "2-story rebuilds in South Palo Alto are out-of-character Orange County monstrosities. . ." I support bans on two-story homes in single story neighborhoods. If they cannot afford an existing two-story house, they don't have to live in Palo Alto. After all, lack of money is why people want to buy a single story and rebuild.


Report Objectionable Content
Email Town Square Moderator
4 people like this
Posted by Multi-Generational
a resident of Another Palo Alto neighborhood
on Oct 15, 2015 at 11:31 pm

My concern about these single-story overlays is not about who will buy a home and what they can do with it, it is about people who have already bought a home and are now having the rules changed out from under them. It's simply not fair to do that to existing home owners. Additionally, the resale impact of restricting improvements is also unfair. All housing markets compare sale prices based in large part on "price per square foot," which severely limits the potential sale prices of these homes in single-story overlays since the ground they exist on are subsequently worth less money.

I would much prefer that neighborhoods adopt building guidelines that work to protect neighbors' privacy but allow standard lot coverage, including a second story. If you want to impose flat roofs that blend better with the neighborhood, so be it, but forcing people to limit their homes to 1800 square feet or so is just unreasonable.

It seems that many of these people demanding that their neighbors not be allowed to add a second story of any kind forget that that some strategically placed trees and/or tall shrubs can completely protect their privacy and add beautiful greenery to look at. It need not be super tall, often just 15 feet or so. Once established, many types of vegetation are also quite drought resistant. Trees bring birds and wildlife to your yard - they are much more attractive than 6' gray, wood fences separating you from your neighbors.

Report Objectionable Content
Email Town Square Moderator
26 people like this
Posted by Taco Bell homes
a resident of Old Palo Alto
on Oct 16, 2015 at 10:10 am

Report Objectionable Content
Email Town Square Moderator
2 people like this
Posted by Resident
a resident of Another Palo Alto neighborhood
on Oct 16, 2015 at 10:17 am

Interesting to read this article along with the one about Granny Flats being allowed to be built on properties. I suppose it doesn't matter about the size of a home as long as it is only one storey.

Report Objectionable Content
Email Town Square Moderator
9 people like this
Posted by Jane
a resident of College Terrace
on Oct 16, 2015 at 2:32 pm

Report Objectionable Content
Email Town Square Moderator
10 people like this
Posted by Ben Lerner
a resident of Palo Verde
on Oct 17, 2015 at 9:42 pm

Ben Lerner is a registered user.


The planning commissioners erred in their assertion that a homeowner must build up to get more space. A few years back Palo Alto changed its lot coverage rules so that if a home is 1-story it may have as as much floor area as if it were 2-stories (setbacks must still be followed).

This is best understood by example: For a typical 7000 sq ft lot, the maximum allowed lot coverage (footprint of the house) is 2450 sq ft, and the maximum floor area is 2850 sq ft, across 2 stories. But if the house is 1-story, it may exceed the 2450 sq ft lot coverage, and be as large as 2850 sq ft in 1 story. Considering that a 2-story house needs a staircase, which is about 100 sq ft or more, you can actually get more usable sq ft from a 1-story house (which doesn't need a staircase), although you will have less yard space as a result.

Hence, you don't lose the option to build a larger house under a SSO, and you gain the comfort of knowing that an out-of-scale, incompatible 2-story "monster home" won't be built next door looking into your glass-walled home.

Report Objectionable Content
Email Town Square Moderator
4 people like this
Posted by Multi-Generational
a resident of Another Palo Alto neighborhood
on Oct 17, 2015 at 10:09 pm

There are many options that require much less than 10 years to grow tall, and you can always do a combination of fast-growing hedge/shrubs and medium-growing trees and remove the fast-growing hedges/shrubs when the trees are big enough (or don't remove them - some are very attractive). I wasn't suggesting your neighbor plant them, I was suggesting homeowners whom want to maintain their privacy when a two-story home is (legally) going up next door plant them on their own property. It's not that big of a deal.

Problem is, if forced to build a single story home at max lot coverage there is no yard left.

I agree with reasonable guidelines so massive and incompatible structures are not built such that they destroy the value of neighboring properties, but I also think a demand that no neighbors can improve their homes is equally unreasonable. Seems there would be better options that could be worked out between those that want noting to change and those that want to scrape and max out with a monster house.

Report Objectionable Content
Email Town Square Moderator
4 people like this
Posted by OPar
a resident of Duveneck/St. Francis
on Oct 18, 2015 at 9:03 pm

Actually, having to plant a bunch of trees to get back the privacy one once had is a nuisance--it makes for a shadier yard, which limits what one can grow (good-bye fruits, vegetables and most flowers.) It means making sunny rooms darker.

Neighborhoods with one-story overlays have a more open, airier feel to them. I wish I lived in one.

As for having the rules changed under them--that cuts both ways--plenty of people bought their homes thinking they had a certain amount of privacy and light--a two-story goes up next door or even across the street and all that changes.

Report Objectionable Content
Email Town Square Moderator
8 people like this
Posted by The PTC misunderstood
a resident of Midtown
on Oct 21, 2015 at 9:46 am

By arbitrarily removing two streets from this application, the PTC side-stepped the super majority will of the residents on this one. Greer Park North has a CC&R dating back to the start of the neighborhood which states One-story. That should have been disclosed to EVERY home buyer at purchase so this should not be a total surprise to anyone, nor viewed as changing the rules.

With a one-story CC&R, they only need to reach 60% in favor of an SSO. This is spelled out in the PAMC (the code). Every single street in this application surpassed 60%, most surpassed 70% and one reached 80%. Do the rights of one recent homeowner trump the rights and will of the super majority of home owners - whether they are long time or recent? Why even have rules if they will be completely disregarded when someone says they disagree?

It should also be noted that just because there is no "yes", it does not mean a property owner is against. Many "absentee landlords" do not respond, even after multiple attempts. Do elections count all the non-voters as a "No"? The fact that three-quarters of residents proactively said Yes should not be arbitrarily cast aside.