Stanford's Hodson shows she digs hitting off sets from Bugg 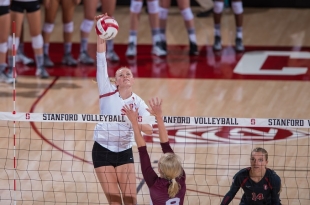 Hayley Hodson is setting a high standard for herself as she finished with 16 kills on 23 swings with just one error to hit a season-best .652. She also had a season-high 15 digs for her sixth double-double. Photo by Karen Ambrose Hickey/isiphotos.com

Flying: How to lower your impact
By Sherry Listgarten | 19 comments | 3,151 views