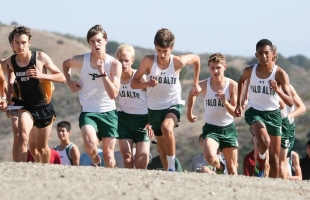 With junior Kent Slaney (second from left) winning his fourth individual title of the season, the Palo Alto boys won the team crown at the SCVAL Meet No. 2 on Tuesday at Crystal Springs. Photo by Malcolm Slaney.

Joyce Shea isn't a freshman though