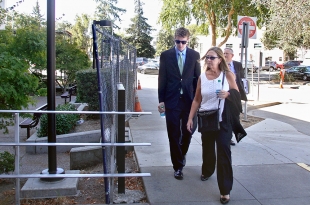 Former Stanford University student Brock Turner, left -- who is facing five felony sexual assault charges, including rape for an on-campus incident in January -- heads into the Palo Alto Courthouse with his mother and attorney on the first day of a two-day preliminary hearing on Oct. 5, 2015. Photo by Veronica Weber.

I commend the heroic actions taken by Carl Fredrik Arndt and Peter Jonsson to intervene on behalf of a young woman who needed assistance!

I have discussed this case with both of my college age kids to stress how incredibly VITAL it is to give and receive clear consent for ALL sexual interactions, and to be mindful that you and/or your partner may be too inebriated to give consent.

It is most essential that we have control over what happens with our own bodies.

The headline should read "The Rape Charges Were Dropped".
The DA knew that this was not a rape very early on - as soon as the SART tests came back at the hospital. We would have a better Justice System if DA's were more forthright with the truth - be more honest with the community and stop placing winning cases above Justice. Now we know that Turner was honest when he stated he did not rape Ms. Doe and of course it is quite possible that he was honest about the entire incident. Due Process needs to prevail. Two people will be significantly damaged by the incident for a long time regardless of the outcome and that is sad. Beyond that, I completely agree with the above comment made by Gunn Alum Mom.

Report Objectionable Content
Email Town Square Moderator
4 people like this
Posted by totally cool etch
a resident of Stanford
on Oct 6, 2015 at 7:50 pm

Report Objectionable Content
Email Town Square Moderator
7 people like this
Posted by Women Should Be More Reponsible with Themselves
a resident of Another Palo Alto neighborhood
on Oct 6, 2015 at 9:20 pm

'Are they ready for fully innovative Indian food?' Ettan arrives in Palo Alto with chaat, caviar and a secret menu
By Elena Kadvany | 0 comments | 3,586 views

Flying: How to lower your impact
By Sherry Listgarten | 11 comments | 2,549 views