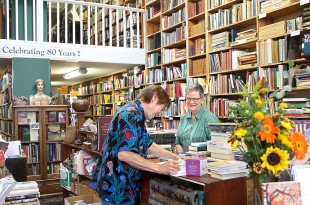 Did I hear that? Midtown is getting some notice from the City Council?


This sounds exciting! I look forward to this event.

BTW, this is the first time that I ever heard of Bell's Books. After visiting their website and reading reviews about their store, this is the type of bookstore that we would enjoy.

It would be great if Palo Alto Weekly/Online could include a weekly column about one of the small businesses in Palo Alto that might be just a bit off the beaten path -- i.e., establishments that are not chain stores. We've lived in Palo Alto for several years now and we're still discovering new places around town.

I used to LOVE going downtown. Now it's just such a pain. I wish our merchants the best. I'm glad business is good, I just wish it was easier from across town. I hope the event reminds people of what wonderful businesses we have here.

Report Objectionable Content
Email Town Square Moderator
9 people like this
Posted by More, Please
a resident of Another Palo Alto neighborhood
on Oct 5, 2015 at 10:33 am

There REALLY should be an event like this for Cal Ave. There are so many wonderful businesses there and on the off-streets.

One for Midtown might be a good idea, too. C. Even though I don't live there, I seem to e d up going there at least twice a week.

Report Objectionable Content
Email Town Square Moderator
1 person likes this
Posted by music
a resident of Downtown North
on Oct 5, 2015 at 10:40 am

Great idea, I live downtown and I leave to either redwood city, los altos, or mtnview to get something different. Found out that Los Altos has music all around the downtown corners. It was great

Report Objectionable Content
Email Town Square Moderator
6 people like this
Posted by If you hate the drive, try this...
a resident of Greenmeadow
on Oct 5, 2015 at 10:56 am

Downtown is a 25 minute very leisurely, flat bicycle ride away. Try the Bryant St. Bike Boulevard which takes you all the way from our homes in the south to downtown via a lovely, low-traffic, shady lane. A very enjoyable bike ride--even for an old lady like me.

If you can't ride a bike, try the FREE City of Palo Alto Shuttle (info here Web Link or, depending on where you live, the VTA 22 bus line Web Link which gets you to the University Avenue Caltrain Station and an easy walk into downtown. :-)

Try it out. You may find you prefer one of these options over driving. (Big bonus-- you won't have to search for auto parking!)

Report Objectionable Content
Email Town Square Moderator
4 people like this
Posted by chris
a resident of University South
on Oct 5, 2015 at 10:59 am

People in Barron Park should try riding the 22 bus.
No hassle with parking.

What a great idea! Hope it spreads to midtown area as well.