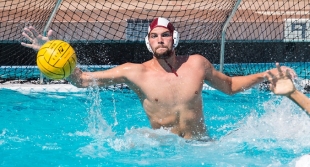 Bret Bonanni scored with 29 seconds remaining to play in regulation, capping off an unlikely comeback, to send Stanford's game against host USC to overtime. The second-ranked Cardinal, though, could not retain the momentum, and the third-ranked Trojans recovered to beat Stanford, 12-8, in a Mountain Pacific Sports Federation contest Saturday.

Stanford (12-2, 0-1 MPSF) looks to rebound next weekend at the SoCal Invitational in Malibu, where the Cardinal and USC could very well meet again. The teams have split their first two meetings.

Bonanni, Adam Abdulhamid and Connor Stapleton each scored twice for the Cardinal, which had its four-game winning streak snapped. BJ Churnside and Mitchell Mendoza added goals.

Stanford found itself behind, 8-3, midway through the third quarter. The Cardinal defense locked down the Trojans offense and went to work, leading to Bonanni's equalizer.

USC scored four times during the extra period to earn the victory, although Stanford out-shot USC, 43-33.

These local restaurants are donating meals to Bay Area residents in need. Here's how to help.
By Elena Kadvany | 6 comments | 11,068 views

Coronavirus: Plan ahead now for a big outbreak
By Diana Diamond | 18 comments | 4,081 views