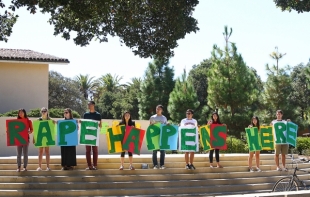 Stanford University students hold up banners to raise awareness about sexual assault as students, parents and other campus community members pass by in White Plaza during orientation week on Sept. 17, 2015. Photo by Veronica Weber.


Hell, The Old Farts at Stanford were so sexist, they wouldn't even accept a woman's Doctorial Dissertation in Psychology to evaluate!

At least that didn't impact her job as Assistant Superintendent at the SJUSD just south of Stanford...

Likewise,
Stanford is not taking care of the issue properly.
They should rebuild the dorms.
Of course this would not solve all the problems,
but one small step they can do.

I heard Nobel-prized Malala Yousafzai is considering Stanford as a freshman next year. I hope she'd choose Stanford. At the same time I hope she wouldn't disappointed when she arrives.

I heard Nobel-prized Malala Yousafzai is considering Stanford next year.
I hope she'd choose Stanford.
At the same time, I hope she is not disappointed once she arrives.

Report Objectionable Content
Email Town Square Moderator
12 people like this
Posted by Missing definition
a resident of Crescent Park
on Oct 2, 2015 at 7:45 am

The article would be more informative if the definition of sexual misconduct, which Dauber and the student leaders are complaining about, were provided.

Report Objectionable Content
Email Town Square Moderator
5 people like this
Posted by StandWithLeah
a resident of Stanford
on Oct 2, 2015 at 8:17 am

The students and faculty are not complaining about the definition of misconduct. They are complaining that the survey questions were misleading and resulted in treating as much as half or more of assault incidents as misconduct.

The definition of misconduct in Stanford policy is lengthy but basically includes all sexual contact that occurs without consent, including penetration. It includes rape in which the victim is extremely drunk but not necessarily unconscious.

The complaint being raised here isn't about the definitions. It's about the misleading and confusing survey item which required students to answer "yes" to both being drunk AND to being unconscious. Students were unlikely to know that they had to check both items, and would check only "drunk." We think that those assaults were miscategorized as "misconduct," generating an artificially low number for assault.

One warning sign that this occurred (beyond the confusing nature of the survey itself) is that Stanford is reporting a number for penetration due to force or incapacitation (6.5%) that is less than half of that reported by peer schools such as Harvard (14.9%) and Yale (20.4%).

It could be that Stanford just has a lot less rape than these schools but why would it? That number is so unlikely to be correct that any competent researcher would go back and look at the methodology to see if it is the result of an error. Perhaps it isn't. Here, there is evidence of a confusing question that probably affected the accuracy of the sexual assault calculation. Stanford should go back and redo that question using the less confusing terminology used by every other Climate Survey.

More than that, Stanford should be more transparent generally. This survey and its press release with it's bogus 1.9% rape rate are an insult to all women. Sending out a press release saying that only 1.9% of Stanford students are raped is outrageous. Saying that students trust the university is also an outrageous misstatement of the data. In fact, women have far far lower levels of trust, and most students do not believe that its very likely that even a student found responsible for rape (in those 1.9% of cases!) will ever face any consequences.

Report Objectionable Content
Email Town Square Moderator
18 people like this
Posted by Why so High
a resident of Another Palo Alto neighborhood
on Oct 2, 2015 at 8:46 am

Why are the statistics of Harvard and Yale so high? Are the intellectually elite of the Ivies that much more angry, frustrated, or sick? Or simply more misogynistic?2

Report Objectionable Content
Email Town Square Moderator
8 people like this
Posted by Bob
a resident of Another Palo Alto neighborhood
on Oct 2, 2015 at 11:16 am

> "I think rape is a huge problem on campus

The US Dept. of Education requires institutions of higher education to report crime statistics on their campuses under the Clery Act. For the years 2010, 2011, and 2012, Stanford reported to the US DoEd data for occurrence of forcible rape to be: 21, 12, 26.

So—is Stanford lying to the DoED? If Stanford is falsifying its data—then why shouldn’t those responsible be held accountable? But if the data is correct—why should people listen to activists like this one?

Report Objectionable Content
Email Town Square Moderator
10 people like this
Posted by What's driving this??
a resident of Old Palo Alto
on Oct 2, 2015 at 11:52 am

Widespread recent news reports indicate the head of the Stanford biz school had an affair with a subordinate female colleague and then fired her husband who was also faculty there. The husband is now suing for that firing which may have been without cause. Sounds pretty disreputable to me with respect to correct interpersonal/sexual relations in higher education/the workplace...and we aren't even talking about the undergrads.

Report Objectionable Content
Email Town Square Moderator
9 people like this
Posted by Why so Low
a resident of Palo Alto High School
on Oct 2, 2015 at 3:18 pm

@Why so High: "There are lies, damned lies and statistics." - Mark Twain

Yes, the stats look pretty bad for the Ivies; that's because they genuinely have a problem on their hands. However, I wonder how the public universities and "jock" schools compare to the, as you call them, intellectually elite colleges. The fact of the matter is, ALL universities have an epidemic, whether they admit it or not. However, certain schools and their students are acknowledging the serious problems they have on campus and trying to deal with it openly. Most colleges are paying lip service, seriously understating the facts, or sweeping things under the rug, as usual. And, by the way, I'm not sure your average Ivy League student has the same sense of entitlement as pampered NCAA football and basketball players at big sports schools. Misogyny is common among men in powerful positions in society, white collar or blue collar. However, a disproportionate number of athletes carry their culture of sexual assault well into their adult, professional lives in the NFL and NBA.

Let's take a close look at the recent AAU survey on sexual assault:

Harvard and all of the Ivies that participated (Princeton did not) are above national average, which is terrible, that's true. In contrast, Texas A&M is probably proud of the fact that they have the second lowest percentage, after Cal Tech. But wait, Harvard's response rate is 53% (highest among all schools). They were also one of the first schools to release their stats on their own. The Aggies? 9% response rate. Hmmm...don't even pretend to tell me that this reflects the reality on campus.

"There are lies, damned lies and statistics."

Report Objectionable Content
Email Town Square Moderator
11 people like this
Posted by Stanford dad
a resident of Crescent Park
on Oct 3, 2015 at 1:00 pm

It is just beyond outrageous that Stanford is claiming a 2% rate of sexual assault. As an alum I am very angry. As a parent I am livid. That says "this is a small problem." It not only says "we don't have to care much," and gives some humble brag "anything more than zero including our tiny 2% is too much" it is telling girls at Stanford not to worry. It's giving them a false sense of security when they should be self protective. That's putting students in danger to protect the brand.

Today's young female children are very different than when I grew up. Now they are playing team soccer, other team sports, and many in Asian combat arts. They area all learning skills very young.

Hopefully they are learning some good skills as to how to handles themselves in a combative situation. Maybe that is a new class for PE in high school.

Report Objectionable Content
Email Town Square Moderator
8 people like this
Posted by Strange Comments
a resident of Another Palo Alto neighborhood
on Oct 4, 2015 at 6:23 pm

Considering some of the comments I have read here and on the "Scary Path" post, I get the feeling that young women are being or will be discouraged from attending college-- due to on-campus dangers.

When I attended Stanford in the eighties, I had one class that didn't end until 7:30 pm--after dark in the fall, wi tear, and early spring. I made it a point never to walk anywhere alone after dark. I never had a shortage of volunteers to escort me back to the dorm, or to wherever I needed to go for food after hours! All a woman needs to do is ask--and it doesn't have to be a male companion. There is safety in numbers--groups of us would walk together, usually with flashlights, to get late-night munchies.