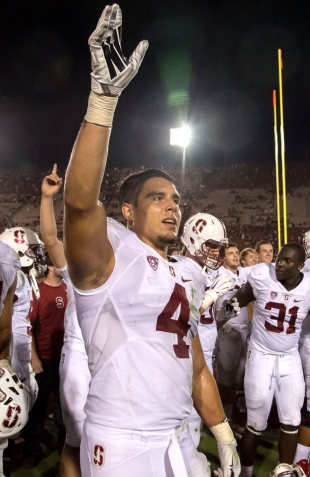 Stanford football coach David Shaw needed less than five minutes to determine that Blake Martinez was a perfect fit for his defense. After a frustrating couple of years dealing with various setbacks, Martinez has spent the past two years proving Shaw right.

Martinez plays in the mode of Cardinal grad Shayne Skov, with seemingly reckless abandon yet always in control, and always in the right place.

"There are certain people you have to see," Shaw said. "You can't always scout ability from game film. Blake is someone I had to see."

Shaw got the chance at a football camp.

"You could see his quickness, size and physical nature," Shaw said. "I watched his first drill, the way he planted, his drive, and his intuitive reaction. I thought to myself 'This is the guy.' I didn't see much more of him the rest of the camp."

That was the moment Shaw determined he would offer him a scholarship. He waited until the end of camp to do so, just to keep him on his toes.

"He came in with natural ability," Shaw said. "He likes the physical contact. I liked him being aggressive. That's what you like to see in a linebacker."

With Palo Alto High grad Kevin Anderson nursing an injury and unable to play again this week, Martinez is the only returning starter on defense as the 18th-ranked Cardinal (2-0 Pac-12, 3-1 overall) prepares for visiting Arizona (0-1, 3-1) on Saturday night in a game televised by the Pac-12 Networks. Kickoff is 7:30 p.m.

So far, a lack of returning starters hasn't been much of a problem for Stanford, which is tied for second in the conference in total defense (331.0), just behind Washington's 321.0.

Martinez is a big reason why Stanford ranks second in rushing defense at 132.5 yards a game. He plugs holes as well as anyone in the country and provides critical leadership to the inexperienced defense.

Martinez has led Stanford in tackles in all four games thus far, and has 50 for the season. He had 12 total in last week's 42-24 triumph at Oregon State. Martinez is on pace to break into Stanford's top 10 for single-season tackles, something that has not been accomplished since Jono Tunney recorded 155 tackles in 1988. Gordy Ceresino holds the school mark with 196 in 1977. Skov ranks sixth all-time with 353 tackles.

Stanford's rush defense will be put to the test this week. Arizona features two of the top four running backs in the Pac-12. Nick Wilson leads the conference with a 142.5 average and Jerrard Randall is fourth at 112.3. They have combined to score nine touchdowns. Cardinal sophomore Christian McCaffrey is fifth at 111.2.

The Wildcats have rushed for at least 300 yards in each of their past three games and have scored in 22 consecutive quarters. They average 555.5 yards in total offense.

With starting quarterback Anu Solomon (concussion) questionable and whose status will be a game- time decision, the running game may have to carry the Wildcats' offense.

"You're talking about a very versatile offense," Shaw said. "Whoever plays is going to be an athletic quarterback that you have to account for, which puts you in so many run-pass conflicts. If Anu doesn't play, I'm sure they'll cater the offense to whoever does start at quarterback. We've got to tackle the quarterback better than we did a week ago, no matter who it is."

Solomon will be under constant observation all week.

"As normal protocol, the doctors and trainers will make that decision and evaluate him every day," Wildcats coach Rich Rodriguez said. "His status for the game is certainly in question right now and we will see how he responds every day, they will do tests every day."

Arizona linebacker Scooby Wright, the 2014 Pac-12 Defensive Player of the Year, will not play due to an ankle injury. He's already missed three games with a knee injury.

"It doesn't change our preparation at all," said Shaw. "They have good players and it's a funky scheme we haven't seen in a couple years. It's unfortunate, also. You always want to play against the best and he's been the best defensive player in our conference for over a year now.

Wright is the Blake Martinez of the Arizona defense.

"His knee is fine, he ran well, and got back into it, but he landed on his right foot at some point in the game and sprained his right foot," Rodriguez said. "We were concerned that it was more than that, but the MRI results came in and so Scooby will probably be out several weeks with foot sprain on his right foot. Our linebacker situation has been a little sketchy anyway, but having Scooby out several weeks is something that we will have to deal with."

The home team has yet to win a game between Pac-12 schools and Arizona, winless against the Cardinal since 2009, is 5-1 in true road games dating to last season. Stanford is 25-3 in home games under Shaw.

The Cardinal has won nine of it past 12 meetings with Arizona and has not lost at home to the Wildcats since 2006.

These local restaurants are donating meals to Bay Area residents in need. Here's how to help.
By Elena Kadvany | 6 comments | 11,103 views

Coronavirus: Plan ahead now for a big outbreak
By Diana Diamond | 19 comments | 4,122 views

Will the Coronavirus Save Lives?
By Sherry Listgarten | 29 comments | 3,889 views

The first few seconds after awakening; before I remember the virus
By Chandrama Anderson | 0 comments | 973 views