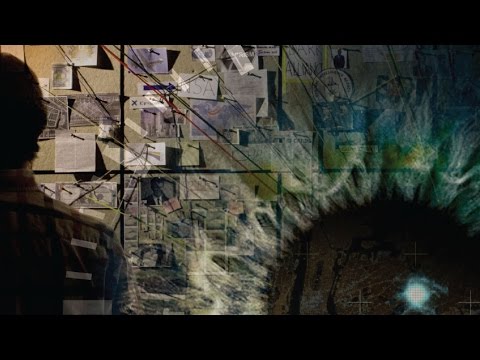 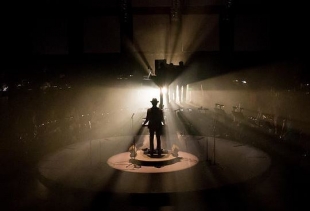 "Real Enemies" will have its world premiere on Friday, Oct. 2, at Stanford's Bing Concert Hall. Photo by Noah Stern Weber.

Our society is awash in conspiracy theories. Some, like the idea that the Soviets were involved in JFK's assassination, seem plausible. Others are more outlandish. Take, for example, the assertion that reptilian extraterrestrials control our government from a secret lair beneath Denver International Airport.

Whatever you may believe about these theories and others, it only takes a quick Google search to confirm that conspiracy theories have spawned countless books, YouTube videos and forum rants. Now, thanks to jazz composer Darcy James Argue and writer/director Isaac Butler, the conspiracy theory genre has spawned something different: "Real Enemies," a chamber work for big band which will have its world premiere Friday, Oct. 2, at Bing Concert Hall as part of Stanford Live's 2015-2016 series.

Argue and Butler recently took an hour away from the rehearsal process to discuss the genesis of the piece and the peculiar hold that these paranoid theories have over the American psyche.

Following his groundbreaking 2011 work, "Brooklyn Babylon," a multimedia collaboration with visual artist Danijel Žeželj, Argue was looking for his next project. That's when his girlfriend handed him "Real Enemies: Conspiracy Theories and American Democracy, World War I to 9/11" by UC Davis historian Kathryn Olmsted.

"She knew I was looking for an idea," Argue explained, "and she said, 'You should read this. It's a fascinating social history of conspiracy theories in America.'"

Skeptical at first, Argue read the book and was intrigued. He gave it to Butler, who had directed the premiere of "Brooklyn Babylon" at the Brooklyn Academy of Music.

"When I was in high school, I was into conspiracy theories in a joking sort of way," Butler said, "so I knew the aesthetic. Olmsted's book shows how conspiracy theories are always around, always relevant. I knew this was what we had to do next, and not just because Darcy's band is called Secret Society."

Butler is referring to the 18-piece big band that Argue assembled in 2005 and which he has worked with for the past 10 years. It is Secret Society, with Argue himself conducting, that will perform "Real Enemies" at Bing Concert Hall.

"Many of the musicians in my band have been with me since the beginning," Argue said. "It profoundly affects the way I write. I try to think about the improvising soloists and what they will bring to the project, not just the notes I'm writing. What kind of musical situations can I put them in that will bring out various aspects of their personalities?" Asked for an example, the composer laughed and offered this: "There's a piece in 'Real Enemies' about doomsday cults, so I thought 'Who's the band member who's most like a charismatic cult leader?' and then wrote for him."

Argue and Butler are quick to point out that the version of "Real Enemies" premiering at Stanford is a concert performance only -- the sonic component of an even more ambitious multimedia production that will have its full premiere later this year in New York. The New York version will involve 15 video screens with projections by theater designer Peter Nigrini. For each of Argue's 13 musical sections -- each devoted to a different conspiracy theory -- the screens will feature video footage and text written by Butler, presenting each conspiracy in a way that makes, in Butler's words, "the right amount of sense."

But in Bing Concert Hall, with the audience surrounding the band on all sides, there is no way to effectively utilize the video elements. Argue notes that the Stanford audience will see less of Butler's textual contributions, rendering the show "much more mysterious. Devoid of original context, the audience will have to make their own connections with the music.

"We're definitely asking more of the Stanford audience, but I hope it will be delightfully evocative ... that it will take the audience on the same descent into paranoia" as the full multimedia production.

And how exactly does one render paranoia in musical terms? For Argue, a composer with a reputation for innovating within the big band idiom, the answer is obvious.

"The tools that lent themselves best to telling this story, which is sort of a shadow history of the 20th century," he said, were the tools of twelve-tone composition, a distinctly 20th-century technique developed in 1920s Vienna by Arnold Schoenberg and championed by many mid-century American modernist composers.

When a traditional work of western music is said to be in a particular key (A minor, for instance, or B-flat major), it means that the composer has created a tonal center by favoring certain notes over others. By the time you reach the end of "Mary Had a Little Lamb," which uses only four notes of the major scale, the shape of the melody and the repetition of those pitches leaves no doubt where the final note is going to land.

Twelve-tone composers, on the other hand, eschew traditional tonality by creating melodies that use each of the twelve notes of the western scale (every single white and black piano key within an octave) exactly once -- forming what is known as a "tone row" -- before returning to any given pitch again. Lacking a traditional tonal anchor that the ear can gravitate toward, twelve-tone music can easily sound eerie or alienating. Argue described it as "a paranoid's dream."

Coincidentally, the rise of twelve-tone composition in mid-20th-century American orchestral music may have been the result of an actual conspiracy. As Butler explained: "There was, to some extent, a shadowy cabal involved in various schools of artistic Modernism. The CIA worked to fund very individualistic schools of art and expression, which were seen as being in opposition to the folkloric, agrarian, collectivist art that the Soviets were doing. Our government was responsible for the flourishing of Modernism in various arts, which it viewed as a tool in winning the Cold War."

Argue's goals for "Real Enemies," of course, are very different, and the cold, academic formalism of Schoenberg's twelve-tone technique did not suit every movement of "Real Enemies." The sections exploring the Sandinista revolution in Nicaragua or the CIA's alleged involvement in the crack cocaine trade in 1980s Los Angeles, for instance, "have to sound like a certain kind of folkloric or popular music," Argue said, "so I had to find ways to use those tools with a different set of aesthetic priorities." The result, he hopes, is a finished piece with "undercurrents of unsettlingness beneath the popular and folkloric stuff," but with a sufficiently recognizable musical vocabulary to be accessible and "convincing for the listener."

One thing seems certain: the concert premiere of "Real Enemies" is likely to be a unique experience for all who attend, whether they are big band aficionados, conspiracy theorists, Schoenberg fans, CIA operatives or our reptilian overlords. The performance at Bing will be followed by a post-show talk in which Argue and Butler, joined by Kathryn Olmsted -- author of the book that inspired the project -- will discuss the cognitive and cultural impulses that drive "conspiracism" in contemporary America.

These local restaurants are donating meals to Bay Area residents in need. Here's how to help.
By Elena Kadvany | 6 comments | 11,111 views

Coronavirus: Plan ahead now for a big outbreak
By Diana Diamond | 19 comments | 4,128 views

Will the Coronavirus Save Lives?
By Sherry Listgarten | 29 comments | 3,896 views

The first few seconds after awakening; before I remember the virus
By Chandrama Anderson | 0 comments | 979 views