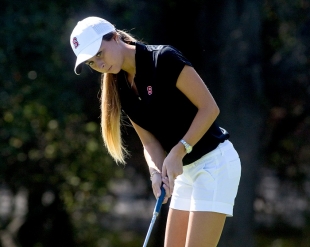 Shannon Aubert rebounded from a double-bogey on the par-4 18th with consecutive birdies at the par-5 first, par-4 second and par-3 third holes. Photo by Norbert von der Groeben/Isiphotos.com

Anne Le Ziblatt, formerly of Tamarine and Bong Su, is back with a Vietnamese noodle bar in Redwood City
By Elena Kadvany | 7 comments | 4,027 views

Can you Pay to Reduce your Carbon Footprint?
By Sherry Listgarten | 5 comments | 1,875 views

You Can Help: Scents and Migraines
By Chandrama Anderson | 0 comments | 1,684 views