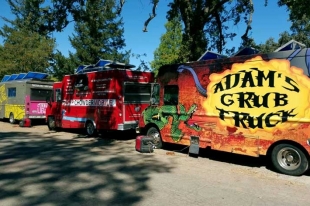 I have many fond memories of summers at Clear Lake as a child.

I send my sympathies to those who have lost loved ones, pets, homes and their community.

It's wonderful to read about charitable work like this. The food truck owners and Stanford Federal Credit Union should be applauded for thinking of others in their time of need. Thank you for stepping up. We need more of this kind of action in the world

Like Bike commuter above, I have many happy memories of family vacations spent at a small resort called Pine Grove at Cobb. There was a large Berkeley contingent there in the old days & my cousin, who had a vacation home at Cobb, has lost it in the recent fire. So thank you local people for pitching in to help out the fire victims.

Thank you, Palo Alto et. al.! After 25 years in PA, we now live in Calistoga where I volunteered for five 12 hour shifts with the Red Cross helping evacuees at the shelter on the Napa County fair grounds in Calistoga: the whole thing has been an epic event - most seeking help, that I saw, had little more than the clothes on their backs when they fled for their lives!! Your generosity and kindness will long be remembered and appreciated❤️

Lost my home in a previous major fire disaster in California and learned a lot through the recovery process. I would love to help. If anyone local is coordinating more help, please provide a contact here.

I can tell you frankly that most people don't know what they need when they go through something like that. The people who volunteered to help who had been through it before and pushed help on us that we didn't even realize we needed, or gave us things we didn't know we needed and said we could always donate it later - that helped the most.

Even if you have insurance, starting with absolutely nothing but the clothing on your back is really hard. It's surprising the number of people who will talk about your life being wiped away like it's a "fresh start." It's not a "fresh start" , for most people it's a giant setback. It's kind of like saying it would be great to be where dreams come true - imagining daydreams, not real actual dreams coming true which is more like nightmares.

In the years since, new technology could solve problems that otherwise could affect some people for the rest of their lives, and I want to help provide that help, but I can't do it alone. Anyone?

Please Apply So We Can Reject You!
By John Raftrey and Lori McCormick | 6 comments | 2,558 views