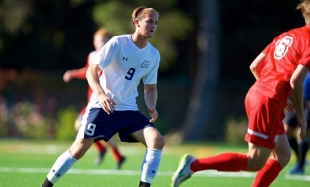 Eli Bunton scored twice and the Menlo College defense took care of the rest in leading the Oaks to a 4-0 victory over host Arizona Christian. Photo by Brian Byllesby/OaksSports.com