Employees with disabilities are slowly gaining greater entry into Silicon Valley companies, but still have far to go 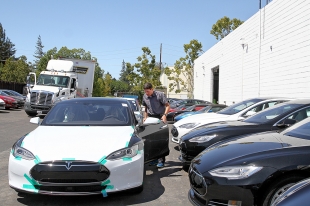 Brett Carmody, an employee at Tesla Motors' auto-detailing department in Palo Alto, opens a car door as he prepares to drive the car into the garage for detailing on Aug. 21. Photo by Veronica Weber.

The challenges of different disabilities are very different from case to case. In addition to employment, there is also the hostile housing climate that destroys any universal design and inclusionary housing principles for the disabled in favor of development interests to densify.

People with "invisible" disabilities are even more hard pressed to find work because of healthcare costs coming back to employers, as well as a general misunderstanding about health-related disability. There are almost no resources to help, and government resources are Potemkin villages. New technology should be helping but biases and negative stereotyping are a huge hurdle, in addition to the utter lack if support and resources. I remember a supervisor walking by with a resume of a really strong candidate. He then teased out a gap, was silent for a moment ans said, "I'll bet this was a disability leave" and the resume went right in the circular file.

Abilities United is amazing but don't address that segment. Rehabilitation resources are not available to people who are not fully well, even though technology today could make up for a lot.

Anyway, great story. There is a lot of work to do to solve this problem of employment for people with disabilities. Glad to see some local companies making sone first efforts.

Our son is disabled so we are very aware of the lack of job opportunities. Our big disappointment has been with the City of Palo Alto. Our son has always been reliable and a perfectionist about things being put in order. When he was younger he applied to the city libraries as a volunteer shelf-er. He did this more than once and never received a reply. I believe he was not considered due to his childish handwriting. Later with the help of a job coach he applied for a paid opening at the libraries and again never heard back. I honestly believe that the city wouldn't even consider a disabled person for a job. No, Ada Cafe doesn't count because it was designed for the disabled.

Wonderful story paloaltoonline! Great work abilities United! I will always choose Hilton. Thank you SAP and Tesla and others.

Report Objectionable Content
Email Town Square Moderator
1 person likes this
Posted by Hope
a resident of Another Palo Alto neighborhood
on Sep 27, 2015 at 8:22 am

This says so much:
""It's not the same way as race and gender and age are within diversity conversations. ... Disability needs to be seen as important as these other dimensions of diversity, but it is often missing in the vision of diversity," "

I hope there will be more. Perhaps about "invisible"/health disabilities and the challenges of getting help and "passing", and how technology can help or hinder. Or about universal design in our city scape and building (currently almost nonexistent - the disabled are treated like an afterthought). Or an update on what our schools are doing to accommodate kids with health disabilities since that article about how poorly they dealt with the young man who had Crohn's or ulceritive colitis.