Local experts dish on how to create the ultimate spread 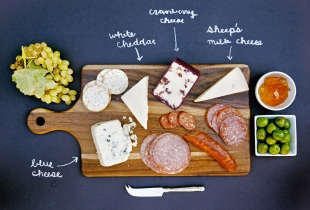 But it takes more than just chunking up cheddar into cubes or scattering crackers around a wedge of Gouda to assemble a quality cheese plate. The endless types of cheese and accompaniments that create a spread can make the task a little overwhelming. Read on for tips from local meat and cheese experts on how to craft an elegant cheese board that will charm party guests -- and their tastebuds.

To assemble a fall cheese board, incorporate the character of the season, said Kai Rasmussen, store manager of The Milk Pail Market in Mountain View. One of Rasmussen's fall recommendations is Gjetost, a cheese from Norway that is primarly made with whey and cow's and goat's milk.

"It's a very unusual cheese because it's kind of caramelized so it doesn't really taste like a normal cheese," Rasmussen said. "It's almost sweet, but it has a rich flavor that I feel is reminiscient of fall."

Another fall option is Wensleydale, a handmade cheese that's sometimes studded with cranberries. (It gets its name from a style of cheese originally produced in the Wensleydale region of North Yorkshire, England.)

"Wensleydale is a drier English cheese," Rasmussen said, but the cranberries, characteristic of fall and holiday cooking, add a sweetness to the cheese's crumbly texture.

Other cheeses to consider: Fourme d'Ambert, a raw cow's milk cheese from the Auvergne region of France (it also works well with the Gjetost, Rasmussen said) and manchego, a strong Spanish cheese made from sheep's milk.

John Nava, general manager and cheese buyer for Sigona's Farmers Market at Stanford Shopping Center, looks to the old English rhyme often used for brides -- "something old, something new and something blue" -- to craft a cheese plate.

"Have a strong presence of blue cheese," Nava recommended, adding that his favorite is Big Rock Blue from Paso Robles-based Central Coast Creamery, a small-batch creamery that specializes in aged cow's and goat's milk cheeses. The blue cheese, which is ivory in color and laced with teal veining, has a mild and approachable flavor, he said.

"It's a universal blue, and it's got one or two notes," Nava said as he nibbled on a sample. "You taste the blue, then it fades and then you taste the creaminess. It has a lingering blue on the backend, but it's not overpowering."

For something "old," Nava recommends a seven-year aged Wisconsin white cheddar, which packs an intense flavor. It's "big and bold upfront," but bitter on the backend, Nava said. The cheddar has a firm texture but becomes smooth and creamy once eaten. The "new" comes from Ewenique, a sheep's milk cheese made in Holland specifically for Central Coast Creamery. The cheese is white with a delicate texture and an earthy sweetness.

Other cheeses to look for: Moo-Na Lisa (Sigona's private label), a Gouda-Gruyere cheese; truffle Gouda, a creamy and luxurious cheese infused with black truffles; and Fromager d'Affinois, a French double-cream soft cheese made from cow's milk.

Nava suggests serving enough of each type of cheese so that all guests can taste them, adding that the best cheese boards are diverse. If you're serving a small party (five people), choose four to five types of cheese.

Expert's tip: Let the cheese sit out before serving time, Milk Pail Market's Rasmussen said. "Let them get adjusted to (room) temperature, otherwise it's a little too cold or too hard (to serve)."

Once you've decided on which cheeses to serve, it's time to pick the accompaniments. Rasmussen likes to keep things seasonal. In the fall, she looks to fresh red and green grapes, pears and quince or quince paste: a sweet, thick jelly made from the pulp of the quince fruit. Fried and salted Marcona almonds add a salty crunch. Partner the cheeses with honey, which complements the salty nature of cheese and crackers. Rasmussen recommends serving a thinner cracker, "so you can taste the cheese more."

Cured meat can add substance to the cheese and act as a perfect vehicle for spreads.

"Especially with our heavy smoked stuff I like (a) nice mild cheese," said Bubert, who suggests slicing links into quarter-inch-thick coins for serving.

Consider these other meats at Dittmer's for your cheese plate: German salami, Italian salami, pepperoni and prosciutto.

For sweeter accompaniments, Bubert recommends a spreadable chutney or jam, including red currant, quince or lingonberry to add a contrasting flavor to the fatty, salty meats.

For garnishes, place pickles, olives and other acidic accompaniments next to the meats, Bubert suggested.

Expert's tip: For an easy and impressive treat to include on a cheese board, purchase Medjool dates and stuff them with mascarpone cheese and walnuts, then top with salt. (If you're going high-end, Nava suggests Salt of the Earth, a 600-million-year-old salt from West Virginia.)

Cheese is best displayed on a natural surface, such as wood, slate or marble, said Alison King, a sales associate at Sur La Table at Town & Country Village in Palo Alto. King prefers an olivewood cheese board because of the wood's natural beauty, but "it's a little more expensive because the wood is rare."

A cheaper alternative is an acacia wood cheese paddle, which features a natural grain pattern and provides a rustic backdrop for the cheese. Slate cheese boards are also a good option -- and double as a writing surface. You can use chalk to write the names of the cheese directly on the slate. Another favorite of King's are boards made of half wood and half marble.

"You can put certain cheeses you'll be slicing on the wooden side and other ones like brie, where you are just going to scoop, on the marble side," she said.

And don't forget about the knives, said King.

Spreadable cheeses such as brie or goat work best with a spreader or butter knife, while harder cheeses like parmesan work well with a square-shaped knife, she said. And for softer cheeses, like cheddar, King prefers a soft-cheese knife with a forked end to pick up the slices.

She also reccomends putting out small serving bowls filled with olives and almonds to add warmth and texture, as well as placing labels in the cheeses so guests know what they're trying.

"The biggest thing is to have color," King added. She reccomends placing a combination of red and green grapes on the board or serving cheese on serving paper that resembles a slice of wood or leaves.

The first few seconds after awakening; before I remember the virus
By Chandrama Anderson | 0 comments | 3,596 views

Can you stay healthy without making more trash?
By Sherry Listgarten | 6 comments | 2,987 views

Think about helping others in our coronavirus-affected area
By Diana Diamond | 7 comments | 2,722 views