End of an era for interactive art installation 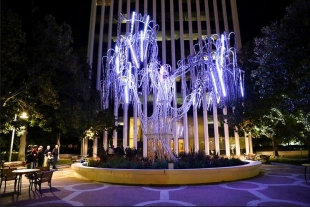 Palo Alto residents are holding a farewell party this weekend for "Aurora," the interactive light sculpture that has stood proudly in front of City Hall since November, 2013. Photo by Scot Kulper.

Why is Aurora leaving?

2 people like this
Posted by Resident
a resident of Another Palo Alto neighborhood
on Sep 25, 2015 at 7:17 am

Since the Weekly usually likes puns in headlines, I am surprised to see it doesn't say "Au Revoir, Aurora". Anyway, I like the artwork and am sorry to see it go.

Since it is one of the nicest pieces of art in Palo Alto I also would like to know the reason why. Now I am also asking if we can get rid of some of the ugly pieces of art around town. Please.

Like this comment
Posted by Another Resident
a resident of Another Palo Alto neighborhood
on Sep 25, 2015 at 9:12 am

I never understood the hype and hoopla over this tree sculpture -- it's mediocre art at best with a low-tech light scheme. Not something that fits with Palo Alto. Seems like no one has been willing to say this, but I know I am not alone in thinking this. Sorry.


Aurora was part of the City of Palo Alto Public Art Program, and as such was always intended as a temporary installation.
Here's a response from Harry Hirschman, who helped bring the work to Palo Alto:
"The City has a very active and ambitious public art program, and it is centered on temporary art installations. In this way our city is always changing, evolving, and making room for new pieces. Much like the city facilitates innovation in technology, the city facilitates innovation in public art by making room for new pieces. Aurora is coming down to make room for what's next."

Has Harry decided on the next installation after the clean up of Aurora?


The next temporary public art work to be installed on King Plaza will be Bruce Beasley's "Rondo I," images of which you can see on his website: brucebeasley.com/rondo-series.