Davenport, Gilbert at Stanford on Saturday for EPATT Kids Cup 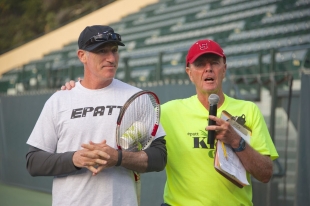 "Working with PAUSD," said Dave Higaki, EPATT Executive Director, "has been such a positive experience. We are eager to launch Project Rally to help ensure that Volunteer Transfer Program (Tinsley) students in PAUSD are reading at or above grade level. We're grateful to the players and the pros for their support and we know they'll have an entertaining time playing together in the Kids Cup for a great cause."

"Last year's Kids Cup (which featured Tracy Austin) was so special and this year promises to be even better, thanks to the hard work of our passionate tournament director, Scott Russell," said Dick Gould, Stanford University's John L. Hinds Director of Tennis. "EPATT is such an important program and the Kids Cup is a great way of supporting EPATT while hosting world-class tennis."

Project Rally, a partnership of EPATT and PAUSD, is an after-school pilot program designed to narrow the achievement gap by providing academic, physical, and social-emotional support to elementary school-aged students and empowering their parents to effectively advocate for and help their children read proficiently at or above grade level. Project Rally will be housed at Fairmeadow Elementary School in Palo Alto and will hopefully expand to other sites and districts over time.

"Project Rally aims to rally parents, educators, students, schools, communities, and volunteers toward a common goal of equipping our students with the competencies, confidence, and experiences to be competitive and successful in school and in life by inspiring, educating, empowering, and engaging their parents and by providing one-on-one tutoring and tennis instruction," explains Kesha Weekes, EPATT's Academic Director. "Research shows how critical it is for a child to be reading at grade level by third grade. Project Rally will help at-risk PAUSD students raise their game so they don't fall behind in school -- they they actually excel at school."

Since 1988, EPATT has been a game-changer for underserved kids. One of the top programs of its kind in the United States. Approximately 170 Stanford students volunteer as EPATT academic tutors each year.

These local restaurants are donating meals to Bay Area residents in need. Here's how to help.
By Elena Kadvany | 6 comments | 11,126 views

Will the Coronavirus Save Lives?
By Sherry Listgarten | 29 comments | 3,905 views

The first few seconds after awakening; before I remember the virus
By Chandrama Anderson | 0 comments | 987 views