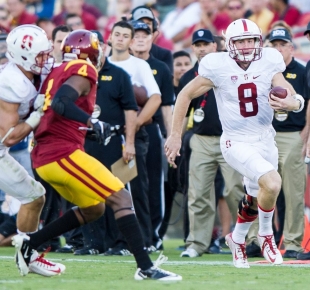 Kevin Hogan (8) used his legs and arm to guide Stanford to a 41-31 upset of host USC in a Pac-12 opener on Saturday in the LA Coliseum. Photo by Karen Ambrose Hickey/stanfordphoto.com

Flying: How much is enough? It's personal.
By Sherry Listgarten | 5 comments | 1,567 views