It's not surprising that Love's start is a fast one 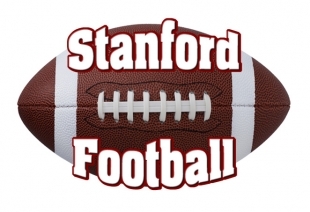 Freshman running back Bryce Love is off to a fast start in his Stanford football career, but has always been a step ahead of the competition.

"I was blessed to be able to accomplish a lot of things," said Love. "I definitely had a lot of fun out there. It (track and field) still holds a special place in my heart."

"He definitely had a major influence on me," the Wake Forest, North Carolina, native said of his father. "I went to my uncle's games and my older brother's (Chris) games before I was able to play and just learned the game from them. I've been surrounded by football my entire life."

His father watched last Saturday night's home opener against UCF at Stanford Stadium, as the Cardinal rolled to a 31-7 victory to improve to 1-1 on the season heading into Saturday's Pac-12 opener at USC.

The 5-10, 180-pound Love had a breakout performance, flashing his speed and moves on a 93-yard touchdown pass from quarterback Kevin Hogan, the third-longest in school history. Love did most of the work on the swing pass and finished with 143 all-purpose yards.

"It's something I've worked on," said Love, a consensus four-star recruit and rated the nation's 18th-best running back by ESPN. "It just happened."

It didn't take long for Mike Bloomgren, the Andrew Luck Director Offense, to recognize that Love was a special player.

"He's from a small town outside of Raleigh," Bloomgren said. "You watch his film and it's great. And you're like, 'Well, what is the level of competition?' He played against some pretty good teams, but then you see his track times, and his track times verify everything you see on film. This guy is lightning in a bottle."

Love rushed for 5,372 yards and 71 touchdowns in high school and was all-state as a senior, but wasn't sure what to do in the end zone after scoring his first collegiate touchdown.

"I'm not a big celebration-type person," he said. "Everybody might say they're going to do something, but then when it actually happens, you're just caught up in the moment. When I got there, it was just unbelievable. It was one of my big goals for the year."

Love has heard from many family members and friends.

"I got some love and support from those back home who were able to stay up and watch the game," said Love. "They definitely enjoyed it."

Defensive lineman Brennan Scarlett has made an immediate impact. He has shown mobility and toughness in the first two games, recording eight tackles and 1.5 tackles for loss.

As much as he has enjoyed contributing, the management science and engineering graduate student said playing with his brother, Cameron, a freshman running back, has been even more exciting.

"It's been good, especially last Saturday night, having him there on the sideline and talking to me," Brennan said. "And walking out of the tunnel together was really special to me."

Freshman Jake Bailey has kicked off the first two games and knows his assignment Saturday against USC: keep the ball away from sophomore Adoree Jackson. Last season, the explosive cornerback and wide receiver averaged 29.7 yards/return and carted two for touchdowns.

"He's the best returner in the country," said Bailey. "My job is to make it so he can't return it. I'm going for touchbacks."

Sophomore defensive end Solomon Thomas has also made great strides. He has started the first two games and made nine tackles and two tackles for loss. He produced his first career sack against UCF.

"Thomas is very quickly becoming what we thought he would," Stanford head coach David Shaw said of the former five-star recruit from Coppell, Texas. "He's physical, athletic and gets off blocks. This is going to be a really good test for him."

Like several teams in the Pac-12, USC often uses an up-tempo, no huddle offense. Shaw prepared his players for it during training camp but admitted it will be adjustment for his younger players.

"This is going to be faster than anything they've seen," he said. "It takes a quarter and a half. "Midway through the second quarter, you get used to it."

The key, Shaw said, is to keep players fresh and rally to the ball.

"You can play them tight, but if you let one guy loose, you're chasing him," said Shaw. "This team thrives on big plays. We have to try to cut them down, we have to contain these guys. We have to play great team defense and know where your help is because we have to gang tackle. One-on-one tackles out in space are tough to do against these guys. We've got to bring a lot of hats to the party."

"They're not going to catch him from behind ... that's the one thing that's for sure about Bryce Love." - Mike Bloomgren.

Coronavirus: Plan ahead now for a big outbreak
By Diana Diamond | 19 comments | 4,110 views

Will the Coronavirus Save Lives?
By Sherry Listgarten | 29 comments | 3,869 views