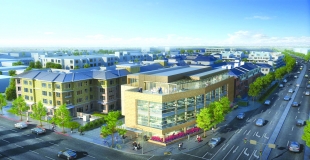 ...because that intersection isn't already a nightmare during peak hours. Perhaps this will dissuade the residents of those newly zoned high-density projects from driving, and they'll all take public transportation instead! Oh wait, no.

Well, at least they'll probably create a space which integrates beautifully with the surrounding neighborhood, like the Miki's disaster at Alma Village, instead of putting up imposing and uninviting walls to the street. Oh wait, no.

Well, at least they'll create some mixed-use attractions, like a quaint cafe that will inspire foot traffic. I know when I have free time, I love to go walk around the Page Mill/El Camino intersection. Oh wait...

It's a little hilarious that the developer is proposing to get a high density high impact developer favorable zoning in exchange for a relatively small concession, when the existing zoning on the property is "public facility".

Report Objectionable Content
Email Town Square Moderator
18 people like this
Posted by Paly Parent
a resident of Palo Alto High School
on Sep 16, 2015 at 9:11 am

I would love to see a public facility mean exactly that. We don't need any more restaurants, coffee shops, nail salons, or tutoring services.

I would love to see some type of "youth facility" by which I mean a business that caters to bringing some fun into the lives of our young people. We have lost the bowling alley and laserquest, as well as the minigolf and gocarts in Redwood City. All these things were businesses that did well and weren't struggling but they became victims of the developers. These also needed a fair amount of space so the land provided a lot more for developers than they were generating in their existing condition.

What we need is a "good idea" fun activity business to become the next "in" thing for young people. I can almost hear the cheers of our youth for something new to do in Palo Alto.

I don't expect the City to provide anything like this for our youth, but it would be nice if they would favor any type of business enterprise with youth in mind.

PS, anyone who thinks that hiking, biking, skate boarding, etc. is all the fun our youth need, then they are sadly out of touch.


Report Objectionable Content
Email Town Square Moderator
23 people like this
Posted by housing
a resident of Community Center
on Sep 16, 2015 at 9:52 am

I really hope they build housing here. We have a desperate need for housing in the Bay Area. We've added so many jobs and so little housing, we've created an entire underclass of people commuting here from as far as Tracy, Stockton, and Gilroy. That's an unfathomable waste of time and life. This is a great location for housing - it's right on a bus line and next to Caltrain and next to a number of services. Of all the places you could add housing while creating the least number of new trips, this is one of the best.

Report Objectionable Content
Email Town Square Moderator
23 people like this
Posted by Ahem
a resident of Another Palo Alto neighborhood
on Sep 16, 2015 at 11:20 am

I've known people who commuted from so far, and it had nothing to do with being "underclass" but because they wanted to live in large houses or lead a rural lifestyle, or because a spouse worked farther afield. Building more packed in expensive housing in Palo Alto wouldn't change that choice for a single person I know.

There is no emergency to pack in more housing in Palo Alto. There is an urgent need yo make Palo Alto a welcoming and safe place for the youth who already live here. in case you hadn't noticed, the mobile home park at Buena Vista was just fine until the development climate became so permissive of overbuilding and someone thought it was worth their while to evict all the residents (especially since the initial plan had anticipated building many times zoning.)

We don't have a need for more housing in Palo Alto. If we don't build a single unit more, we will be just fine. New housing isnt just about units, it's about paying for new schools, infrastructure, straining the natural environment, using more resources lije water, dealing with increased pollution from congestion, etc. developers arent nearly paying to offset those problems and our city is barely dealing with solving them.


Report Objectionable Content
Email Town Square Moderator
10 people like this
Posted by Another Concerned Resident
a resident of Another Palo Alto neighborhood
on Sep 16, 2015 at 11:46 am

We have 90,000 people commuting to Palo Alto every day. The ADT numbers on page 12-32 of the Comp Plan Transportation Element show that Page Mill (280 to El Camino) is at capacity, and Oregon Expressway (101 to El Camino) is on its way to capacity. Although getting  to a final Comprehensive Plan is months to years away, we as a city need to be thinking about what kinds of things might be done to mitigate traffic. Thinking regionally, and about land use, is one of them.

Google, FaceBook (and probably others) run big commuter busses back and forth to SF, and perhaps other places. We need to investigate the possibility of organizing that kind of service with the businesses already in Palo Alto, Stanford and the businesses in the Stanford Industrial Park. Those busses would need a place to stop to drop off and pick up commuters - a transit hub. The VTA lot, centrally located on the corner of Page Mill and El Camino would be an excellent choice for a Palo Alto's first transit hub. The lot already has numerous shuttles and busses stopping there. Although it doesn't appear that Palo Alto's current shuttle stops there. If this becomes an expanded transit hub, perhaps the current Palo Alto shuttle route could be reevaluated and expanded.

Setting up a coordinated commute bus service with Palo Alto employers and Stanford would help reduce at least some of the traffic and parking. Any people we can get out of  cars will also help with CO2 emissions. You all can do the math on how much CO2 our 90,000 commuters emit every day. We need to do as much as possible to reduce that number. We should not give up any reasonably located open space which could be used to facilitate that.

Report Objectionable Content
Email Town Square Moderator
18 people like this
Posted by Sue
a resident of Barron Park
on Sep 16, 2015 at 12:20 pm

Has everyone forgotten that that property sits atop the big toxic plume? It seems that any proposal that includes digging an underground garage is ill-advised.

Report Objectionable Content
Email Town Square Moderator
7 people like this
Posted by Rose
a resident of Mayfield
on Sep 16, 2015 at 3:35 pm

This lot is SMALL. To build anything means going up up up with little or no street setback! As someone said above -- yes, let's have another unattractive Miki's style failure. This is an awful location for anything of size. Why not keep the parking -- isn't that what we don't have enough of?