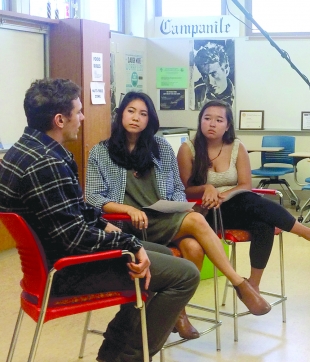 Actor and Palo Alto native James Franco, left, talks about the inspiration for the high-school level film course with writers from Palo Alto High School's student newspaper The Campanile: center, junior Alice Zha, and right, senior Aiva Petriceks. Franco was a student writer for The Campanile when he attended Paly in the mid-1990s. Photo by Elena Kadvany.

Can't wait to see what the kids can do with such resources.

Is it possible for kids who couldn't or didn't want to apply for the film class to take the Cinequest online film course (whether free or at cost)? I can't seem to find a link.

Chris Zaharias is a registered user.

Report Objectionable Content
Email Town Square Moderator
2 people like this
Posted by Scott Montague
a resident of another community
on Sep 14, 2015 at 9:52 am

Very nicely written article! The Franco(s) are extraordinary people, really, ... I have recently been blown away by how few people will take a bit of time to help someone else. I truly admire those who do; more than any first place ribbon or highest grade ... there can only be one "best" so it is not a reliable source of happiness. You can help many and share in their success, feel productive, feel like you made the world a little better instead of just yourself.

I probably need help with correcting this grammar, make a comment with how it should have actually been written.

I agree with Scott Montague 100%

What a cool opportunity for these future artists!

Congratulations to the students in the class and thanks to the Franco family for the opportunity.

I would be interested to know how many students subscribed for the opportunity to attend the class. Was it oversubscribed? How were the students selected if this was the case?

I think it is wonderful when something like this happens and some get the opportunity to do it. I just think of those who hoped to get selected and didn't get in. How sad for them.

Report Objectionable Content
Email Town Square Moderator
2 people like this
Posted by Anderson
a resident of Barron Park
on Sep 21, 2015 at 10:40 am

Report Objectionable Content
Email Town Square Moderator
2 people like this
Posted by Paly Mom
a resident of Palo Alto High School
on Sep 21, 2015 at 11:15 am

@Anderson: No need to hate Franco - his heart is in the right place. However, this is concerning: "with the students meeting with Franco once a month for four hours and working with one another in between. (He'll be flying in from Canada, where he's currently working on a mini-series.)"

I agree that high school students need some continued guidance - they are still immature. I also wonder how they will find time to meet outside of class because the most difficult part of projects in high school is finding time to meet between everyone's extracurriculars, tutoring, sports schedules, and the mounds of Paly homework. This is going to take a lot of time away from homework (bye, bye AP classes). It seems to be an appropriate class for those who seriously want to enter filmmaking as a career - at least for the college applications and resumes.

Still, great that Franco is offering it, although would be preferable during summertime where there can be daily focus.

Report Objectionable Content
Email Town Square Moderator
2 people like this
Posted by OPar
a resident of Duveneck/St. Francis
on Sep 21, 2015 at 12:31 pm

I really wish people would read the articles before commenting. Esther Wojcicki is teaching the class with Franco. There were 500 applicants, 40 were let in. Priority was given to kids in Paly's film class (makes sense to me.)

Yes, the film project will take time. Lots of things take time--including sports, band, drama, working on the school newspaper, robotics and video games. Not all kids have decent time-management skills or a schedule that allows for a big project like this. Plenty, however, do.

The amount of concern-trolling over this one project reads mostly like envy. (And, no, my progeny did not make the cut--but I still think it's a wonderful opportunity for the kids who did get in.)

Report Objectionable Content
Email Town Square Moderator
4 people like this
Posted by Nayeli
a resident of Midtown
on Sep 21, 2015 at 4:03 pm


This sounds exciting! I wish the best to these lucky students!

DK didn't want to take Franco's class but was very interested in the Cinequest class offered to everyone who didnt get in. No one answered whether it was possible for other students to join the Cinequest online class. Were you offered a link? DK tried calling/emailing Cinequest but no response. Interest BCO currently working on trying to write a script about a grandparent and the Cinequest class could really help.

'Are they ready for fully innovative Indian food?' Ettan arrives in Palo Alto with chaat, caviar and a secret menu
By Elena Kadvany | 0 comments | 3,590 views

Flying: How to lower your impact
By Sherry Listgarten | 11 comments | 2,558 views