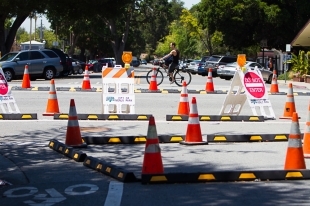 I am glad they finally realized what was obvious from day 1. Right turns are not the problem. They really need to move the crosswalks. Have people cross Ravenswood further east either in the middle of the block or at laurel. Remove the crosswalk from the south side of the intersection an allow people to only cross on the North side. Yes this will be an inconvenience for pedestrians, but it will be safer for everyone.

6 people like this
Posted by Listen Better
a resident of Another Palo Alto neighborhood
on Sep 11, 2015 at 12:18 pm

Why didn't the MP city powers listen to the complaints people registered since day one? It could have prevented that horrible tragedy last year that left an infant motherless!

I hope the infant's father has filed a big, fat lawsuit.

1 person likes this
Posted by ListenBetter
a resident of another community
on Sep 11, 2015 at 1:02 pm

The barriers that are being removed were put in place after the accident. @Listenbetter, you need to do some more research before making such inflammatory statements!

Report Objectionable Content
Email Town Square Moderator
6 people like this
Posted by OldGuy
a resident of Menlo Park
on Sep 11, 2015 at 4:03 pm

Ultimately we need grade separated rail. Could have done it in the '90s when there were federal funds available, but Menlo slept instead. Could have had it done by now if we (and Atherton & Palo Alto) had embraced HSR instead of throwing a NIMBY tantrum.

Report Objectionable Content
Email Town Square Moderator
8 people like this
Posted by Pamela
a resident of Menlo Park
on Sep 11, 2015 at 7:06 pm

Why not have the cars pay attention to traffic and pedestrians ahead of where their cars are, instead of stopping on the tracks? The current crosswalk location makes a lot of sense and should not be moved because motorists can't be bothered to pay attention to traffic. One should not even begin to go over the tracks until there is a guaranteed space for the vehicle on the other side. Plain and simple.

Or maybe we need the road to stay four lanes the entire way to Middlefield, instead of narrowing to two right after the library. Or maybe we could have more people live near where they work, instead of driving over to the East Bay (you know that's where they're going, Willow to Dumbarton bridge). Wild ideas, I know.

Report Objectionable Content
Email Town Square Moderator
3 people like this
Posted by baycommuter
a resident of Menlo Park
on Sep 11, 2015 at 8:38 pm

Two out of Pamela's three ideas require modification of driver behavior. Safety engineers learned a long time ago that people will do dumb things so you have to engineer around them.

Report Objectionable Content
Email Town Square Moderator
2 people like this
Posted by resident
a resident of Another Palo Alto neighborhood
on Sep 12, 2015 at 7:50 am

At a different level here, there is an important, critical point being made here, that the City of Palo Alto in particular needs to heed and that is the need to evaluate the actual effects of what it is doing on safety, driver response,aesthetics in traffic engineering,signage, street markings.In Palo Alto it appears there is a complete disconnect in this regard. The Lytton/Alma intersection with its confusing, distracting flashing signals,etc is just one example. This is one more facet of an
out of control city government in Palo Alto.

I'm shocked that any reasonable traffic planning consultant would have advised shutting down right hand turns onto Alma. I respect the City Council, but I have to question either (A) the quality of the traffic consultants they're using or (B) ignoring traffic consultants they're using. Not sure whether it was (A) or (B), but either way something is fundamentally wrong. OF COURSE shutting down right turns onto Alma was going to increase cars on the tracks. How could that have been otherwise? How did someone think that? No, better question: Who thought that? And is the city still using that person?

"Who thought that? And is the city still using that person?"

Of course they are -- that person is rumored to possess certain videos. Be sure your insurance is paid up if you drive in Menlo.