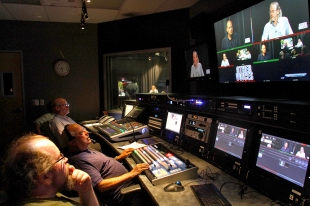 TD Daniell, center, operates the switcher as fellow Midpen Media Center volunteers Sean George, front left, and Ken Dickman, back left, watch as “Other Voices”, a monthly live talk show hosted by the Peninsula Peace and Justice Center is filmed in the studio on Sept. 8. Photo by Veronica Weber.

sueppr is a registered user.

2 people like this
Posted by Local fan
a resident of Another Palo Alto neighborhood
on Sep 11, 2015 at 2:31 pm

Bravo! (What's the sound of two hands clapping when you don't have cable? Would love if there could be digital broadcast -- any chance?

@ Local fan - All their channels are online. Check out Web Link (And, shamelessly plugging my own show -- featured in the photos -- you can catch past episodes here: Web Link )

Report Objectionable Content
Email Town Square Moderator
2 people like this
Posted by JoyW_Aim
a resident of Adobe-Meadow
on Sep 16, 2015 at 10:58 pm

This is awesome! Congratulations on your anniversary! What a way to bring people together, and such a fulfillment to see how much it has grown. Community broadcasting companies like this can benefit from film equipment hire Web Link, as they can get top- notch equipment and new models of cameras without having to purchase them. Renting equipment means they don't need to change them every other year, when new models come out, and they still have great cameras and lenses to use in every shoot.