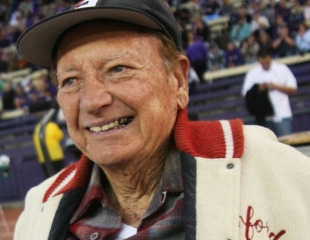 Jack Laird, ’40, a former basketball player and associate director of development in the Stanford Athletic Department for 40 years, died last week. He was 98. Photo by David Gonzales/stanfordphoto.com


What an amazing life that he lived! Imagine all of the wonderful (and terrible) things that he saw and experienced over his 98 years. Rest in peace.