Save the last dance 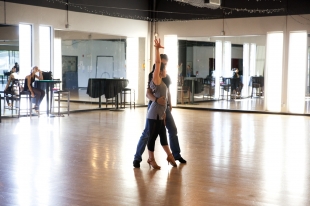 Private dance instructor Daniele Gozzi practices the cha cha with a student in the "nightclub" room at Cheryl Burke Dance studio in Mountain View, which will close at the end of September. Photo by Michelle Le.

This is sad for the dance studio. It is also devastating that Laser Quest is moving - to San Jose. This means that we are losing another youth activity in our area. It is a shame that the reporter didn't make the same phone call that I made to find out where Laser Quest would be moving.

LinkedIn, Google, Apple and Facebook are providing wonderful facilities for their employees. Those that don't have access to them are losing out in more ways than high salaries and other benefits. R & R facilities for those who don't work in these high tech companies are becoming fewer and harder to find.

In the discussion about student stress and mental health, not to mention the S word, we must also discuss the ability of our youth to have fun outside the challenging world of school, sports and performing arts. We lost the bowling alley. Now we are losing Laser Quest. Where are our kids going to play and have fun?

1 person likes this
Posted by Agenda
a resident of Another Palo Alto neighborhood
on Sep 9, 2015 at 5:43 pm

When you spoke with laser quest, did you ask if they wanted to stay in the area? Maybe they wanted to move to San Jose for various regions ( more potential customers???)
I know in Palo Alto owners of businesses can not do what they want (I.e. Palo Alto bowl, Buena vista etc). They have to get an okay from the public before that are allowed to close, sell or move!!!
Talk about a city with a sense of entitlement

Report Objectionable Content
Email Town Square Moderator
2 people like this
Posted by Patrick Swayze
a resident of another community
on Sep 9, 2015 at 6:18 pm

Kids should learn basic ballroom dance in school. It will prove far more useful in life than most sports. Is any school board member reading this? Don't just keep doing the same things in schools and expect a better result.

Report Objectionable Content
Email Town Square Moderator
4 people like this
Posted by LQfan
a resident of Mountain View
on Sep 10, 2015 at 7:36 am

Agenda - I spoke with Laser Quest and the only reason they are moving is because their building is being taken over. They said they had a hard time finding space that is big enough to set up their big game room plus all the party rooms they provide for groups to have cake and pizza time.

Paly parent - I share your concerns for the kids and teens in this whole area. We also lost the mini golf, bumperboats and go- art park off of 101 and another bowling alley in Redwood City.

I have no idea what your agenda is. I will tell you that mine is the welfare of our kids.

I'm not sure what your youth was like, but mine included lots of time spent with friends doing all sorts of fun activities. The point some of us are trying to make is that at the heart of what it is to be a teenager shouldn't be school or the push to get into college. The heart of being a teenager must include making wonderful memories with friends of happy times spent hanging out.

Without places to do this, we are hampering their experiences. Kids don't want to spend all their hangout time at their own home or their friends' homes. They don't want to be treated like little kids, they want some independence. They need to be able to have real communication with friends, not virtual. We owe it to our kids to make their teen years as fun as ours were.

[Portion removed.] As parents, what can be done about finding some "non competitive" entertainment for our kids that doesn't involve a screen?

Report Objectionable Content
Email Town Square Moderator
2 people like this
Posted by six of one
a resident of Another Palo Alto neighborhood
on Sep 10, 2015 at 8:30 am

Paly parent--it is too bad that you do not suggest any solutions for the problems you claim exist.
Should the city take over and run these businesses? Have you considered trying to help find a local location for LQ, bowling alleys, go kart places etc?
We are talking about privately owned businesses. Regardless of how we feel, the owners still have the right to do with their property as they desire (within the legal limits).
Also I noticed that all the activities that you talk about involve spending plenty of money--laser quest, bowling, go karts etc. are not cheap. What about children from families that are not as well off as you are (since spending plenty of money on these activities is not a problem for you).
Plus there are plenty of activities available--look at the area we live in--there are plenty of open space for hiking and camping, playing fields for soccer, basketball, baseball etc. There are swimming pools. There is a skate park in Palo Alto as well. Seems to me that there are plenty of activities available for teenagers that do not involve just going over to one anothers houses.
Do you actually have any evidence that teenagers are hanging out in parks in the dark or in "wrong places"? Also, not familiar with any places in Palo Alto that would be considered "wrong places"!!!
Anyway, LQ is moving. if it is that important, load up the van and take th ekids to San Jose when they re-open.